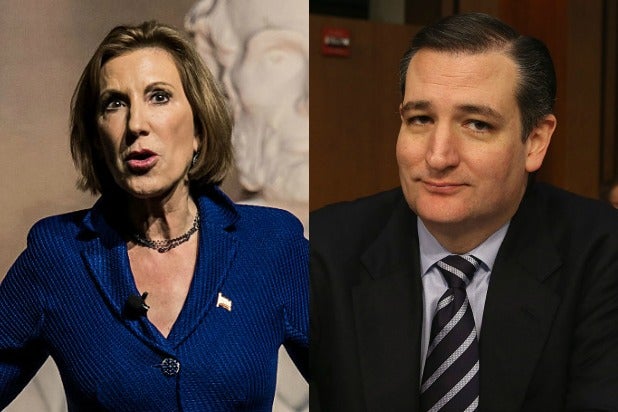 Ted Cruz announced on Wednesday that if he becomes the Republican nominee for president, former presidential rival Carly Fiorina will be his running mate.

“After a great deal of time and thought, after a great deal of consideration and prayer, I have come to the conclusion that if I am nominated to be president of the United States, that I will run on a ticket with my vice presidential nominee Carly Fiorina,” the Texas senator told a cheering crowd, adding that the former Hewlett Packard CEO is “an extraordinary leader.”

During a rally in Indianapolis on Wednesday, Cruz made a last-ditch move to gain momentum after a disappointing showing during Tuesday’s primaries.

Indiana, which votes this Tuesday, has emerged as a must-win state in his path for the White House. Cruz will need a strong showing in the Hoosier State to try and block GOP frontrunner Donald Trump from securing the 1,237 delegates needed to clinch the nomination, and keep alive his hopes of a contested Republican National Convention.

“She is careful, she is measured, she is serious,” Cruz said about his prospective new running mate. “She doesn’t get rattled by whatever is being thrown at her. And you know we all saw that when in one of the earliest debates, Carly confronted Donald Trump, a man who in his characteristic understatement said of her, ‘Look at that face.'”

Florina, who took the stage to “Where the Stars and Stripes and the Eagle Fly” by country singer Aaron Tippin, told the a supporters she was “very proud and very humbled and honored” to accept the offer.