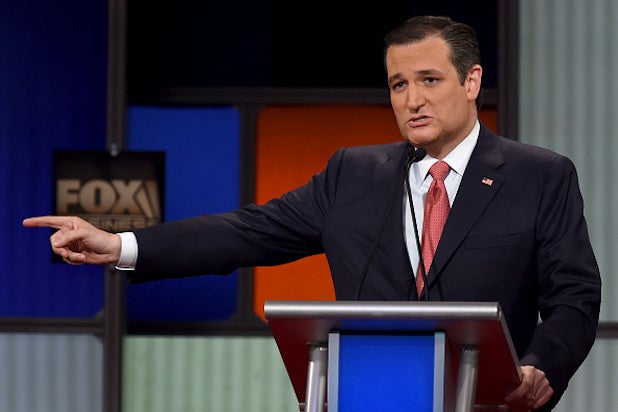 When asked why he failed to disclose a 2012 million dollar loan from Goldman Sacks, a fact uncovered in a Wednesday New York Times article, Cruz deflected by blaming the paper, and calling the article a “hit” job.

“Maria, thank you for passing on that hit piece on the front page of the New York Times,” Cruz sarcastically told moderator Maria Bartiromo. “You know the nice thing about the mainstream media is they don’t hide their views.”

Cruz then went on to argue that Times columnist Frank Bruni has it in for him.

To prove his case, Cruz brought up Bruni’s October article “The Scary Specter of Ted Cruz,” where Cruz said Bruni compared him to “an evil demonic spirit from the movie ‘It Follows.'”

Cruz also said he and the Times “don’t have the warmest of relationships.”

He then took the opportunity to slam the Democratic presidential frontrunner, telling Bartiromo that “unlike Hillary Clinton I don’t have masses of money in the bank, hundreds of millions of dollars.”

He said he was forced to take a loan because his opponent during that senate race had deep pockets, adding that he and his wife ended up investing everything they owned.

He called the failure to disclose the loan a “paperwork error.”

During his closing statement Cruz brought up yet another film, the upcoming movie “13 Hours: The Secret Soldiers of Benghazi,” which focuses on the 2012 Libyan attacks that killed four American citizens including U.S. Ambassador Christopher Stevens.

“Tomorrow morning a new movie will debut about the incredible bravery of the men fighting for their lives in Benghazi and the politicians that abandoned them,” Cruz said, referring to Hillary Clinton and the Obama administration.