Ted Cruz is picking a fight with Trevor Noah this week. After Noah did a segment on his show regarding the U.S. Census, and how the congressional seats worked out this year, Cruz took to Twitter to scold Noah for apparently bashing Texas.

Cruz’s home state will pick up two seats in Congress as a result of the 2020 census, while New York needed just 89 more people to fill out their census to avoid losing one seat. Noah laments New York’s loss, but does not mention Texas is the clip he posted.

Still, Cruz quoted it on Twitter, saying “Trevor Noah whines that people are fleeing high-tax blue states & moving in droves to low-tax states like Texas, where the jobs are. Doesn’t understand why people like freedom.”

To that, Noah responded via The Daily Show’s account, saying “Not sure I’d be using the words ‘fleeing’ and ‘Texas’ in the same sentence, Senator Cancun.” This tweet, of course, refers to when Ted Cruz left his home state and constituents in the middle of one of the worst Winter storms Texas had ever seen, which left thousands without power and water, to go on vacation with his family to Cancun. 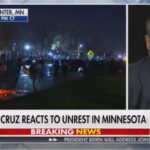 Also Read:
Ted Cruz on the Killing of Daunte Wright: ‘There Are Accidents That Occur’ (Video)

Cruz later tried to say he was simply dropping off his daughters in Cancun, and had every intention of immediately flying back, but records proved otherwise. Weeks later, at his CPAC speech, Cruz poked fun at the situation, joking about how awesome Cancun is.

When Trevor Noah made reference to the incident, Cruz doubled down, tweeting back once more. “I wear your scorn with pride. I remember when the Daily Show was funny,” Cruz tweeted.

Of course, it was Noah who got the last word (at least for now). “And with that Ted Cruz has officially fought back harder against a tweet from a late night show than he ever did when Trump called his wife ugly.” Cruz had not responded to Noah’s last tweet at the time of this writing.

You can check out the full conversation between the US Senator and the late-night host below.