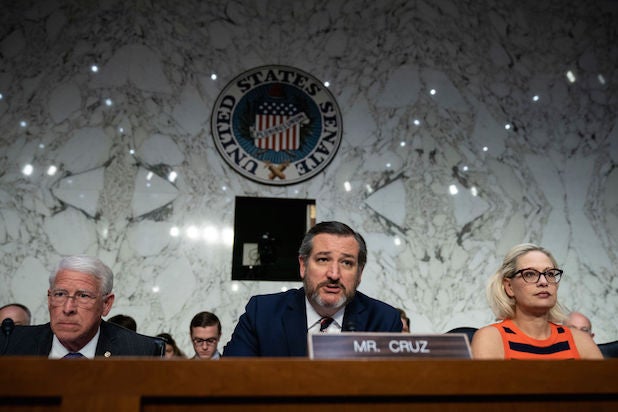 Sen. Ted Cruz ripped Facebook, Twitter and Google on Wednesday, threatening the tech giants with antitrust sanctions after charging them with stifling conservative voices and blocking right-leaning ideas from spreading — something that the companies have denied.

Cruz, while leading a Senate Judiciary Committee called Stifling Free Speech: Technological Censorship and the Public Discourse, said reports have shown a “consistent pattern of political bias and censorship on the part of big tech.”

The Texas Republican then called out the companies for a “lack of transparency,” saying that the biggest social platforms use obscure rules to crack down on “disfavored” voices along political lines. If this continues, Cruz argued, lawmakers may be compelled to act against Silicon Valley.

Also Read: Most Americans Trust Facebook Less Than the US Government

“By almost any measure the giant tech companies today are larger, and more powerful, than Standard Oil was when it was broken up,” Cruz said. “And if we have tech companies using the powers of monopoly to censor political speech, I think that raises real antitrust issues.”

Cruz echoed the complaints of many conservatives in the last year who have said companies like Twitter, Facebook and Google overwhelmingly target right-wing users, while failing to take action against liberal users who have also run afoul of their rules. Most notably, digital shock jock Alex Jones was kicked off nearly every major tech platform last summer, with Twitter ultimately joining several of its Bay Area peers in banning Jones for “abusive behavior” in September.

“I understand where that concern is coming from because Facebook and the tech industry are located in Silicon Valley, which is an extremely left-leaning place,” Zuckerberg said. “And this is actually a concern that I have and that I try to root out in the company is making sure that we don’t have any bias in the work that we do, and I think it is a fair concern that people would at least wonder about.”

At Wednesday’s hearing, Carlos Monje, Twitter’s director of public policy and philanthropy, said Twitter is an “impartial” platform — and pointed to data suggesting tweets from Republican and Democratic lawmakers receive the same engagement on average.

“Twitter does not use political viewpoints, perspectives, or party affiliation to make any decisions, whether related to automatically ranking content on our service or how we develop or enforce our rules,” Monje told lawmakers.

Those assertions have done little to curb the skepticism of many Republicans, including President Trump, who blasted “biased” Facebook, Twitter and Google in November.

“Something is happening with those groups of folks that are running Facebook and Google and Twitter, and I do think we have to get to the bottom of it,” Trump said last month, continuing along the same topic. “It’s collusive, and it’s very, very fair to say we have to do something about it.”