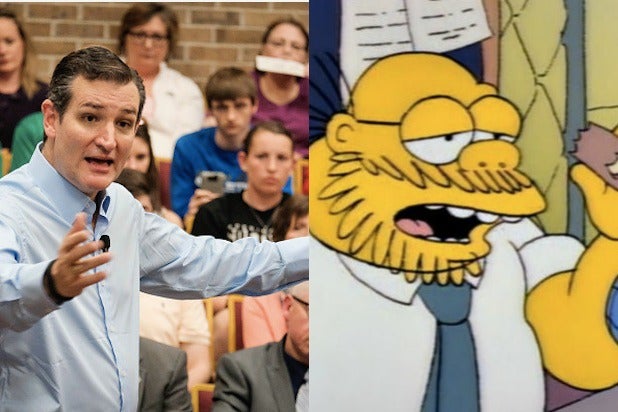 Ted Cruz has made it his adoration for The Simpsons public, recently citing his two favorite episodes.

The Presidential candidate said he loved “‘Round Springfield,” which sparked the post 9/11 French slur “cheese-eating surrender monkeys”, and “Treehouse of Horror VII,” when aliens took over Bill Clinton and Bob Dole’s bodies.

Unfortunately for Cruz, the feeling isn’t mutual, as the Simpson’s show runner doesn’t reciprocate the love.

“To paraphrase Kang, ‘Ted Cruz?’” he said to The Daily Beast.  “Go ahead, throw your vote away,” Simpsons showrunner Al Jean told The Daily Beast, using one of the senator’s favorite episodes against him.”

A tough blow indeed for Cruz, as losing the cartoon vote often creates a ripple effect among the rest of the animation community.

Well see how the Texas Senator bounces back, although he’s got some real-life humans to compete with now as he has a slew of real-life candidates to deal with in Rand Paul, Marco Rubio, Hillary Clinton, and soon-to-be Dr. Ben Carson and Jeb Bush.