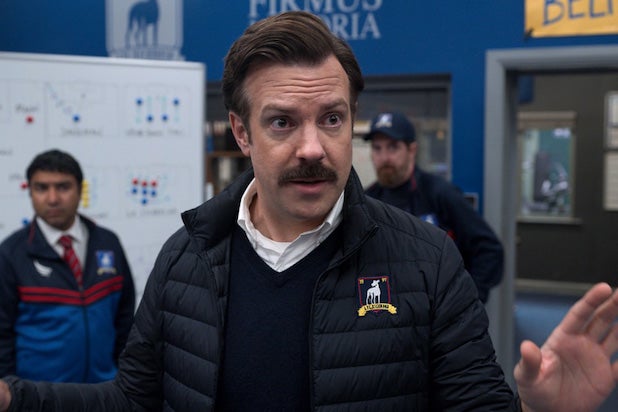 Apple TV+ has renewed the Jason Sudeikis soccer comedy for a third season before Season 2 has even started production. (That’s expected to happen in London in early January.)

Five days after its debut, “Ted Lasso” was renewed for a second season. And now, this.

The series was developed by Sudeikis, Lawrence, Joe Kelly and Hunt, and is based on the pre-existing format and characters from NBC Sports.

Also Read: A Clearly Frazzled Ted Lasso Is Ready to Bathe - but Definitely Not Bury - Himself in His Work (Exclusive Video)

That original Ted Lasso was basically just a clueless American who yelled a little too much. This one is really nice.

“The perception of what Americans are abroad right now is — it’s a bummer when you hear it firsthand,” Lawrence, who had previously shot another series in Prague, told TheWrap back in August. “It’s literally overweight idiots with guns on their back. That’s not from me, it’s from other people. So we started to really obsess with what’s the version of the clueless American — when we’re doing some fish-out-of-water stuff and shooting overseas — that we want to show? What we came up with, way too much subtext, is in social media, politics, public discourse right now, there’s this weird combination in our country of ignorance and arrogance.”

“We said, if we’re still going to have Ted be a clueless guy about soccer, he can’t be ignorance with arrogance, he has to be ignorance with curiosity,” he added. “And that kind of just really translated into being an openhearted, openminded nice guy.”

Apple TV+ is available on the Apple TV app on iPhone, iPad, Apple TV, iPod touch, Mac, select Samsung, LG, Sony, and VIZIO smart TVs, Amazon Fire TV and Roku devices, as well as at tv.apple.com, for $4.99 per month (after a 7-day trial).