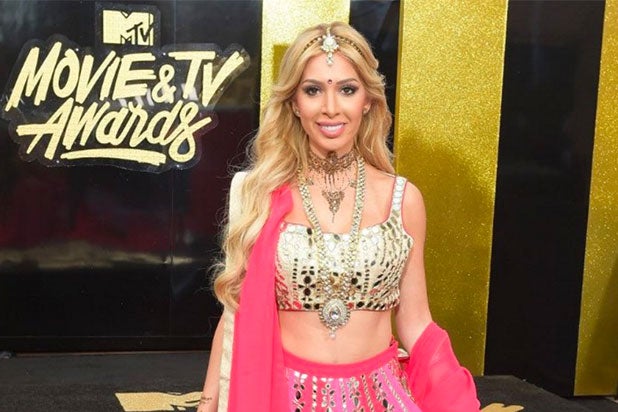 “Teen Mom” star Farrah Abraham has filed a lawsuit against MTV parent company Viacom, saying she was “sex shamed” over her decision to enter the pornography industry, and was wrongfully terminated from spinoff series “Teen Mom OG.”

Abraham is seeking more than $5 million in the suit, which was filed Tuesday in federal court in Texas.

According to the suit, in October 2017 “Teen Mom OG” executive producer Morgan J. Freeman confronted Abraham at her Texas residence and, “alongside his production crew, harassed, humiliated, discriminated against, disrespected, ridiculed, degraded, and sex shamed Ms. Abraham for her recent decision to pursue opportunities in the adult entertainment industry.”

Abraham starred in the adult-film offerings “Farrah Superstar: Backdoor Teen Mom” and “Farrah 2: Backdoor and More,” released in 2013 and 2014, respectively.

The suit goes on to say that Freeman threatened to end her career with MTV and to sabotage future deals between Abraham and MTV.

“Shortly after this confrontation, and as a direct result of Freeman following through on many of the threats he made,” Abraham was informed “that her participation for the remainder of the current ‘Teen Mom OG’ season was no longer needed,” the suit says. Abraham also says that the plug was pulled “on a lucrative deal” that “had been in negotiations for months.”

“We respect Farrah’s decision to pursue other endeavors and we wish her the best,” said a Viacom spokesperson. “Regarding her suit, the claims are without merit.”

The suit alleges wrongful termination/retaliation in employment, negligence, defamation and assault, among other counts.