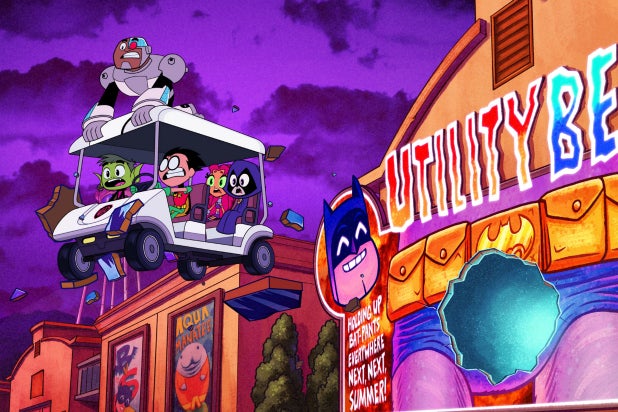 I should confess from the jump that I’m a big fan of superhero self-parody: from “Not Brand Ecch!” and “What the–?” to “Ambush Bug” and “World’s Funnest,” watching the big publishers make fun of themselves has led to some of my very favorite comics over the years.

That same reckless sense of mocking the (Bat)man in the mirror is alive and well in “Teen Titans GO! to the Movies,” a big-screen adaptation of the popular Cartoon Network series in which the titular adolescents do everything they can to make it — where else? — onto the big screen.

Unfortunately for Robin (voiced by Scott Menville), he and his teammates — alien warrior Starfire (Hynden Walch), shape-shifter Beast Boy (Greg Cipes), goth-girl mage Raven (Tara Strong), and human-android hybrid Cyborg (Khary Payton) — are the laughing-stocks of the superhero world, since this team is more interested in waffles and musical numbers than in actual heroics. Heck, they aren’t even on the list for the premiere of “Batman Again,” and they can only crash by stealing seats from the Challengers of the Unknown.

So yes, if you’re the kind of DC Comics fan who knows who the Challengers of the Unknown are (as well as Detective Chimp and Metamorpho, and you know the difference between Plastic Man and Elongated Man, and you get why it’s funny that Nicolas Cage is the voice of Superman), this movie is loaded with little side-gags and inside jokes aimed directly at you. And if you’re not, then you’ll still get the broader parodies of “The Lion King,” Stan Lee cameos and “Back to the Future,” to name just a few.

Anyway, the team figures that its only chance of being taken seriously is to acquire its own arch-nemesis, and they land upon Slade (Will Arnett), who has an evil scheme that, if you squint at it just right, seems not all that different than the DC Universe streaming network that Warner Bros. is planning to launch soon. But even as our heroes battle this formidable foe, they aren’t entirely sure that he isn’t Deadpool.

Also Read: The Winners and Losers of Comic-Con 2018, From 'Aquaman' to 'Titans' to Donald Trump

(And since the Deadpool character is thought by many comics readers to be a knock-off of the original Slade Wilson/Deathstroke character, that too is a joke with many levels.)

Taking a Cartoon Network program and stretching out into a three-act movie doesn’t always work — the 2002 “Powerpuff Girls Movie,” for example, felt irredeemably padded — but co-writers Aaron Horvath and Michael Jelenic (Horvath also co-directed with Peter Rida Michail) maintain the show’s primary-colored, big-eyed wackiness (in a way that never looks cheap) while keeping the jokes coming in such a constant barrage that there’s never time to grow fidgety.

“Teen Titans GO! to the Movies” never wears out its welcome, from the hilarious skewering of some of DC’s most sacred cows (Kryptonite, Crime Alley) to a range of musical numbers that include an 80s-style you-can-do-it anthem (compete with sax solo) and hip-hop-flavored self-aggrandizement. (The former, whose joke title I won’t spoil, could well become the new “Everything Is Awesome.”)

So yes, this might be the “Deadpool” for kids who are too young to see “Deadpool.” But if you’re an adult who enjoys Ryan Reynolds’ brand of fourth-wall-violating and feeding-hand-biting, this “Teen Titans” movie might tickle you, too.