A Teen Vogue contributor faced a permanent ban from Twitter this week after comments they made about “trans exclusionary radical feminists” (more commonly known online as “TERFs”). As the name suggests TERF’s do not believe transgender women should be part of mainstream feminism and have been a point of controversy within feminist theory for a decade.

“If any TERFs like or retweet this, I’m shoving my foot up your ass,” said writer Danielle Corcione in a tweet. Corcione told the Daily Dot that the comment was a joke within a longer thread and a reference to the “That ’70s Show” character Red Forman. 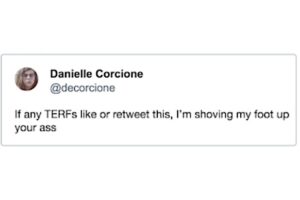 In a note from Twitter, the platform told Corcione they were suspended because the tweet ran afoul of rules prohibiting “specific threats of violence” or wishing for “the physical harm, death or disease of an individual or group of people.”

The social media company also warned that any attempt to skirt the ban by making new accounts would be fruitless and they too would be shut down. An appeal by Corcione was also rejected by the company.

Reps for Twitter did not immediately respond to request for comment and generally refrain from speaking out about specific accounts, but the permanent suspension was ultimately lifted, as Corcione is now currently active on the platform. Corcione declined to say how they managed to get the account restored.

“TERFs should not be a protected group on Twitter. Trans people, especially transgender women of color most hurt by transmisogyny, ought to be a protected group,” said Corcione in a statement to TheWrap. “LGBTQ+ people, especially queer and trans people of color, face so much harassment and violence in our everyday lives that is normalized. Having a voice is the bare minimum, and many of us don’t even have the opportunity to speak and be heard.”

Twitter has faced broad criticism over their policies on harassment, with both left- and right-wing Twitter accusing the company of going easy on the other side. After years politicizing the verification process, transforming it into a form of quasi-endorsement, Twitter moved to unverify a number of extremist accounts, including known hate figures like Richard Spencer and Louis Farrakhan.

The Corcione suspension comes as the company is aggressively moving to remove fake, bot and troll account on the website. More than 70 million such accounts were moved in May, according to Engadget.