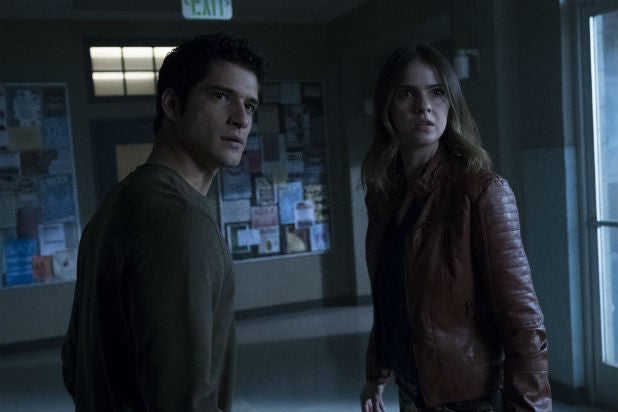 “Teen Wolf” sends the fur flying one last time with Sunday’s series finale, and star Tyler Posey admits to getting emotional about the end of the MTV show’s run — even if he didn’t always want his co-stars to know about it.

Posey, who has played alpha Scott McCall for six seasons, told TheWrap that he felt it was his duty to give a few heartfelt speeches to his cast in the final days of filming.

“There were a couple times when there were these impromptu speeches during one of our lunches leading up to the last few days,” Posey said. “I felt compelled to say something, so I would stand on the chair. I didn’t have anything planned, so just was rambling on. I got really emotional — I didn’t break down or anything, but I was choking back tears.”

However, there was another time when he was unable to avoid the waterworks, which happened while the core cast members were shooting one of their final scenes together. (Certainly, he wasn’t the only cast member to get nostalgic, as Women.com reported that co-star Dylan O’Brien got to keep Stiles’ Jeep.)

“It was perfect, and it was raining,” Posey said. “We were in L.A., and we had a skyline behind us, just really beautiful. And I got a little choked up then, too, but no one knew. I kept that one to myself.”

The actor revealed that he actually had a hand in writing the first sequence of the finale, as it was an idea he had pitched a while back to series creator Jeff Davis.

“It really sets a new tone for the show,” Posey explained. “It matures the show a lot and kind of opens up the door for a new setting for ‘Teen Wolf’ and Beacon Hills in the future, if MTV wants to come back to the show. So I’m really excited about that.”

Last week’s episode featured Deucalion (Gideon Emery) getting shot down by Monroe (Sibongile Mlambo) and her team, and the character meets his demise in the finale. Posey refers to the death as “sad” but adds that the character’s heroic end is “a good way to go out — it’s kind of cool.”

As for recent comments from MTV brass about a possible reboot, Posey said he is “absolutely” open to returning as Scott.

Also Read: MTV's New 'Laguna Beach': How 'Siesta Key' Plans to Recapture the Magic on the Opposite Coast

“I’ve always thought that the show was going to go on forever,” he said. “I know that ‘Teen Wolf’ is going to come back one day. I don’t know when or how, but I’d love to be a part of it. I grew attached to the show, and it became a part of me.”