Network TV may be a cyclical business — but for bruised and battered broadcasters battling the worst economy in a generation, there’s little evidence to suggest a bounce back is in the cards anytime soon.

If anything, things could get a lot worse before they get better. Some observers are even beginning to question whether there will ever be a turnaround, predicting that the business model which has sustained broadcasters for close to 60 years has begun an irreversible decline.

The latest blow: A disastrous upfront advertising market that saw revenues plunge an estimated 15 percent from last year, dropping from $9.2 billion in 2008 to around $7.8 billion, according to estimates by several publications. 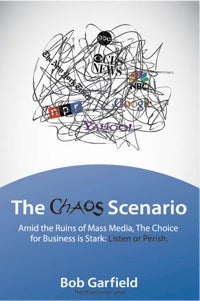 "This is a turning point," argues Bob Garfield, author of the just-released media doomsday tome "The Chaos Scenario" and the long-time critic for Advertising Age.

He believes networks will continue to bleed ad dollars, which will lead them to reduce original scripted programming, thus causing deeper ratings declines…. and even further drops in ad revenue.

"It’s the beginning of a structural tailspin… the total collapse of the network television model," Garfield predicts.

In fact, Garfield — echoing the feelings of multiple industry leaders interviewed for this article, most of whom spoke only on the condition of anonymity — believes the current network landscape will look dramatically different by the middle of the next decade.

"I don’t think we’ll have four networks five years from now," he said. "One of the networks will drop out, maybe two."

If there’s any silver lining in all this doom and gloom, it’s that broadcasters aren’t completely burying their heads in the sand and ignoring the looming crisis.

While their public pronouncements remain largely upbeat, their actions over the past months indicate they realize massive change is a must if they have any hope of proving the Bob Garfields of the world wrong.

The shifts range from draconian belt-tightening to stepped efforts to create — or at least consider — new revenue streams for network programming outside of advertising.

On the cost side of the equation, networks are playing hardball with studios when it comes to license fees for veteran shows.

Witness NBC’s decision to walk away from "Medium" and "My Name is Earl" last spring rather than meet the fiscal demands of CBS Television Studios and 20th Century Fox TV, respectively. Or Fox’s up-to-the-brink talks with 20th on "Bones," a successful drama which nonetheless almost proved too rich for the network’s blood.

In years past, networks tried to get tough on costs but were stymied because there always seemed to be another buyer willing to spend "crazy money" for a series, pilot or piece of talent.

But now, "The ‘idiots with money’ don’t exist," said one senior network executive.

The same sense of realism holds in the actor, writer and producer markets.

Overall deals with writers, for example, have become all but extinct. Case in point: the creator of one of TV’s most successful franchises — Anthony Zuiker of "CSI" — recently saw his lucrative overall deal with CBS Television Studios replaced with a more modest first-look agreement.

It’s a return to how TV operated 20 or 30 years ago, when many top dramas and comedies boasted staffs of four or five scribes, rather than the dozen-plus members that had become commonplace.

Meanwhile, the little excesses once accepted as part of doing business in the land of show are no longer being tolerated. Even that most basic of Hollywood rights– extravagant catering– has been targeted.

Consider what happened when one TV executive walked on to the set of a pilot last spring.

"It was the most amazing spread I had ever seen," she recalls. "I called over the producer and said, ‘You can’t have this anymore.’ They understood."

It’s not just talent that’s being asked to rein in costs. Earlier this month, a network publicity department sent a memo to all of its executives asking them not to eat any of the food served to reporters at the network’s portion of the TV Critics Assn. press tour.

Another conglomerate is closing in on its goal of eliminating the hugely expensive practice of burning hundreds of DVD copies of screeners– not just for critics, but for their own executives. Instead, this company is using technology to let execs stream both dailies and full episodes on whatever platform works best for them, including their home plasma sets.

"Every penny is being looked at," another top network chief says, noting complaints about the cutbacks are far fewer than you’d expect.

"We’re losing salaries and we’re losing people. If you can’t get free sodas, I think people will survive," she says. "Everybody recognizes we have to do this to maintain the health of the business."

That’s one reason talent in new shows doesn’t tend to gripe when told the pilot they shot in Los Angeles will now be a series produced in Connecticut or Canada or one of the other locales that offer super-attractive tax deals to lure production.

And producers who stay in Los Angeles aren’t bitching when they get a memo from the studio asking them to use a green screen instead of scheduling a location shoot.

"When you leave the studio, your cost goes up $35,000 to $75,000 per day," one studio executive says. "We’re encouraging shows to put more investment into art direction…and visual effects."

The new fiscal discipline is particularly apparent on new shows, where studios are taking advantage of the current climate to establish miserly habits early on, since it’s much harder to cut spending once a show is established.

Despite all this penny-pinching, network suits are well aware that reducing costs is simply a way of slowing the bleeding.

"Cost-cutting isn’t going to cure our ills," one network boss says. "At a certain point, you can’t cut any more. There has to be a change in the business models."

CBS research chief David Poltrack earlier this month outlined a scenario under which networks would bring in big bucks by getting consumers to pay to watch their shows online– not directly, but via charges levied by their broadband supplier.

He even talked up the Christmas 2010 arrival of TV sets that will easily allow consumers to watch broadband video on their 52-inch LCDs.

"If the broadcast networks can establish online video as a preferred form of nonlinear television distribution… then (they) can develop the second revenue stream
that has to date eluded them," Poltrack said.

Networks are also realizing that they simply can’t afford to produce anywhere near the once-standard 22 hours of original scripted programming.

Fox has always existed as 15-hour a week network which most weeks programs less than a dozen hours of scripted fare.

Now, NBC has taken the much-criticized step of replacing costly 10 p.m. dramas with "The Jay Leno Show," a nightly comedy hour that will cost about 1/5th the pricetag for five hours of first-run dramas.

While many are predicting long-term failure for the scheme, others think the Peacock is smart for conceding the fact that it no longer had the financial (or creative) firepower to keep churning out one scripted drama flop after another.

Garfield believes NBC’s move is just the beginning of an even more significant shift away from scripted hours.

"Get used to no new episodes of ‘Lost’ and ’24,’ and seeing Jay Leno eight days a week," he says. "The number of scripted sitcoms and dramas will continue to diminish. And the number of episodes of ‘Dancing with the Stars’ and ‘The Biggest Loser’ will increase."