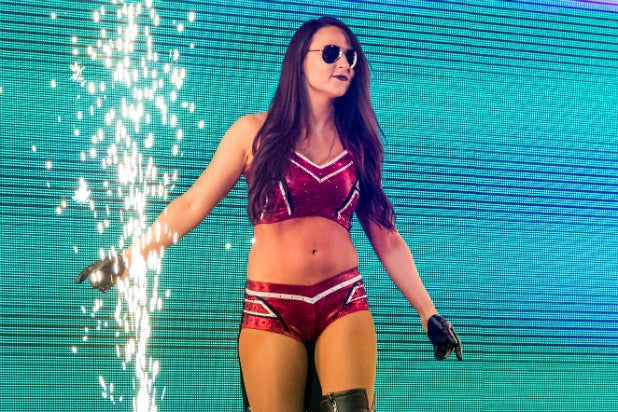 “Tenille Dashwood” is a cool-ass name, but you probably know the Aussie better as “Emma” (and God forbid, “Emmalina” — remember that?) from her time in WWE. But Tenille Dashwood is both the Ring of Honor wrestler’s real name and the one she’s now called in the ring, which is a trend in sports entertainment these days.

Ahead of her big Supercard of Honor XII match on Saturday, TheWrap asked Dashwood why so many pro-grapplers are using their given names in the squared-circle these days, something that hadn’t happened for decades and decades.

In her case, coming out of WWE’s big leagues, using her birth name afforded Dashwood the opportunity to “be in control” of her career, she told us — in and out of the ring.

The self-branding move is particularly important in Dashwood’s case, as she has 1.55 million Twitter followers and 1.6 million on Instagram. Both social media accounts are just her name — her real name — it all works cohesively.

Also Read: Wrestling Legend Bully Ray Tells Us Why Ring of Honor Is the New ECW

Plus, Dashwood, who was released by WWE back in October, is currently shopping around her cooking show, “Taste of Tenille” (possibly coming soon to Twitch?). If you’re going to name your TV series after what’s on your birth certificate, it behooves the world to not know you as something totally different.

And Dashwood says her fans want to know more about wrestlers’ lives outside the ring now — why not start letting them in by giving up your real name? (If you don’t believe her about the added attention on the personal lives of the athletes, we refer you to the rise of “Total Bellas” and “Total Divas,” among other wrestling reality shows.)

Oh yeah, “Emma” is ex-boss Vince McMahon’s copyright, anyway. No one else can own your actual name. Smart move.

“If you’re in a tag team match and you’re cheering for your partner — if you’re used to saying their real name, sometimes that just comes out, and that’s obviously wrong,” she told us as one example of why even the closest of friends still call each other by their stage name.

“We’ve been wrestling each other for years and years and most of us don’t know [each other’s] real names,” Dashwood said. “So, it helps us in the locker rooms too.”

OK, so you’re no longer Emma and you’re definitely not Emmalina — but what happened with that long-teased, short-lived disaster, anyway? We asked Dashwood exactly that.

To catch non-fans up, WWE had teased the birth of the new sexy, bikini-model character Emmalina for 17 weeks. The culmination literally lasted less than one minute on WWE TV before executives reverted her back to Evil Emma.

Yeah, it was confusing for fans and detrimental to Dashwood’s career.

“There really isn’t too much to say,” the serious wrestler told us about that bust. “Basically, they had an idea, I guess, for a character at one point, but eventually along the way they realized it just wasn’t for me. It wasn’t the best form of me — that’s Evil Emma.”

“I wanna get out there and wrestle,” Dashwood explained. “I’m definitely not the ‘Diva’ sort, I’m the wrestler.”

Dashwood is wrestling Sumie Sakai on the pre-show card Saturday at Ring of Honor’s Supercard of Honor XII from New Orleans. Should she win that match, which is live-streaming on Facebook starting at 6:30/5:30c, Dashwood will compete on the main show at Ring of Honor’s top pay-per-view of the year.