With the morning sun beaming down on the Apple Store in downtown Santa Monica, Calif., the sparse crowd that showed up to get its hands on the freshly unveiled iPhone 8 had no reason to bring sunblock.

The excitement that typically surrounds the release of a new iPhone was replaced with a collective “meh” on Friday.

“I wasn’t feeling [the iPhone 8],” said Michael, a 25-year-old that scoped out the device, before leaving empty handed. “By the look of it, not many people are feeling it.”

Several of those that did grab the $699 smartphone pointed to necessity, rather than the 8’s features, as their reason for shelling out.

“My phone got stolen, that’s the only reason I got it,” said Katie, a 21-year-old from Santa Monica, to TheWrap. “It’s much harder to get back home, [and] it will cost me $200 more,” said Sergei, a tourist visiting from Russia. “I’m also going to get the ‘X.'” 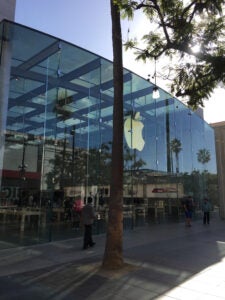 The Apple Store at the 3rd Street Promenade: no pushing and shoving for the iPhone 8

Ah, the iPhone X. Apple quickly subdued the hype for the iPhone 8 at its product launch last week, showing off the company’s new flagship device only minutes later. The 8 is undoubtedly a step forward in the iPhone’s evolution, but it mirrors the previous iterations of the device; the X, on the other hand, breaks the mold, with its wider screen, removal of the traditional “home button,” and facial-recognition software.

Many leaving the Apple Store said they’ll simply wait for the X to come out before upgrading their iPhones, without concern for its $300 price tag increase compared to the 8. In fact, only one customer said he’d deliberately chosen the 8 over the X. “I just didn’t need all the extra new features,” said Ron, a 62-year-old from Los Angeles. “I’m fine with the 8.”

The Apple Store wasn’t a ghost town, though. The next generation Apple Watch, now cellular-enabled, was clearly a hit.  “I can run with it now,” said Vince, a tech worker from Santa Monica, about the untethered Watch. “I don’t need my iPhone anymore.”

Others echoed the same thing — and said they’d rather wait for the next iPhone instead.

“It’s my first Watch ever,” said 24-year-old local Michael, as he strapped on the device and hopped on his bike. “And I’m definitely waiting for the iPhone X.”