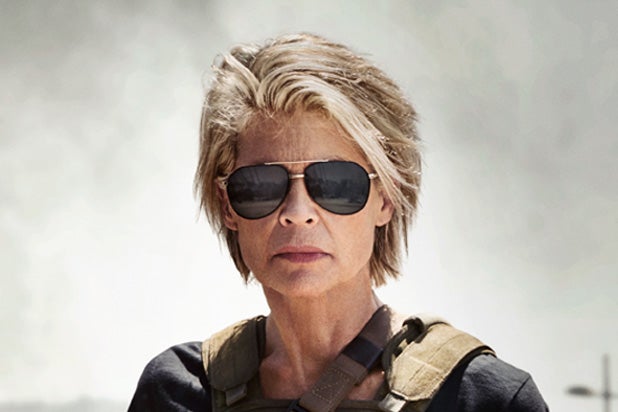 For months, the plot of “Terminator: Dark Fate” has been kept under wraps, but now we have some clues about the upcoming sequel from director Tim Miller, who appeared at Paramount’s CinemaCon presentation to provide a sneak peek.

“I still remember just sitting in that audience being in awe of what Jim [Cameron] did,” Miller said in a speech. “If you had told that nerd that one day he would get to continue the legacy of what Jim Cameron started, he would have passed out in his f–ing popcorn.”

The work-in-progress sneak peek shows a highway in Mexico City, where a new Terminator sent through time to protect humanity suffers a hard fall upon arrival. When she comes to, she immediately takes out a trio of police officers, takes a bystanders’ clothes, and drives out to find the woman she’s been sent to protect.

The sneak peek also include a look at the new evil Terminator that will try to secure humanity’s dark fate. Played by Gabriel Luna, this Terminator can turn from solid to liquid and back like the T-1000 from “Terminator 2: Judgment Day” can. Unlike that one, however, he can split into two different Terminators and attack at once.

But Skynet has a badass standing in their way: Sarah Connor played once again by Linda Hamilton in her first collaboration with Cameron since “T2.” And she hasn’t lost a step, blowing up the Terminators with one of the biggest guns you’ll ever see in a film. Oh, and she gets to say that famous line: “I’ll be back.”

Cameron, who is producing and came up with the story, has promised that “Dark Fate” will have a sense of closure to it and align more closely with the events of the second film, as opposed to the subsequent sequels. Arnold Schwarzenegger will also return to lead a cast that also includes Mackenzie Davis and Natalia Reyes.

While James Cameron is heavily involved as a producer, “Deadpool” director Tim Miller is directing the sci-fi/action sequel based on his story co-written with David Ellison. Josh Friedman, David S. Goyer, Billy Ray and Justin Rhodes all wrote the screenplay.