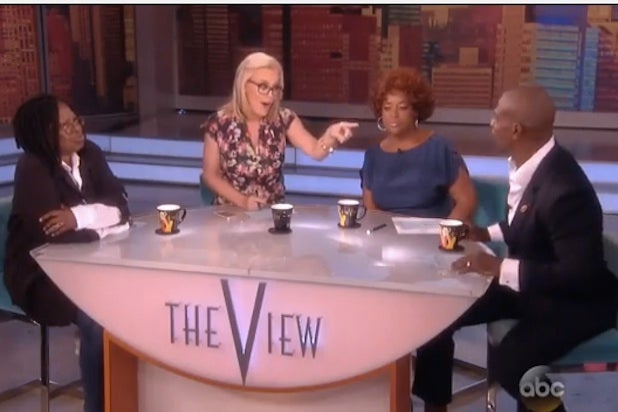 Guest co-host Terry Crews made a passionate plea for the importance of a father in a child’s life on Friday’s episode of “The View.”

“I’ve posted things on social media and people got angry at me and what I said was that there are some things that only a father can give you, OK?” Crews said. “Now, people went, ‘wait, wait, my momma…’ I said, hold up. This is what I believe and I believe this from my heart. We care more about organic food than about organic people.”

Crews explained that fathers gave children a name, their story and their security.

Jenny McCarthy shot back at the “Brooklyn Nine Nine” star and defended her work as a single mother.

Also read: ‘The Talk’s’ Julie Chen: It Was a Mistake for ‘The View’ to Hire Jenny McCarthy

“I’m a single mother, and I can guarantee you I can give Evan every one of those things also,” McCarthy interjected.

Sherri Shepherd backed up Crews comments saying that “there are things that a father can do that a mother can’t.”

Also read: Megyn Kelly Rips Jenny McCarthy on Vaccine Flip-Flop: ‘She Raised a Lot of People’s Fears About This!’ (Video)

Whoopi Goldberg hit back at Shepherd’s remarks saying they took away from the importance of mothers.

McCarthy argued that she was able to imitate what a man does in ensuring confidence for her kids.

“Are you saying Evan can’t get confidence now?” McCarthy pressed. “This can only be from a father?”

“What I’m telling you is a man has got to give him his security somewhere in his life,” Crews shot back.

“Evan is the most confident, awesome kid,” McCarthy countered.