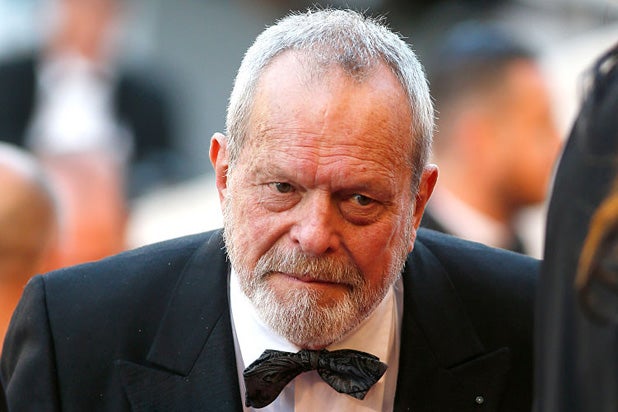 After a saga nearly as long as the Miguel de Cervantes epic, director Terry Gilliam was supposed to start shooting “The Man Who Killed Don Quixote” this fall. But like Quixote’s sidekick Sancho Panza, he just can’t seem to win.

Gilliam appeared yesterday on BBC’s Radio 2 Arts Show with Jonathan Ross and revealed that the intended production start date of Oct. 4 was not to be, as a producer on the film failed to deliver the goods.

“I was supposed to start to be shooting it starting next Monday. It’s been slightly delayed,” Gilliam said. “I had this producer, a Portuguese chap, who claimed he’d get all the money together in time. And a few weeks ago, he proved that he didn’t have the money. So we are still marching forward. It is not dead. I will be dead before the film is.”

Adam Driver and Michael Palin had been set to play the lead roles, and Alberto Iglesias was writing the score. Olga Kurylenko, who was a Bond girl in 2008’s “Quantum of Solace,” was also involved.

The movie follows an arrogant publicist, Toby (Driver), who films a movie based on the fictional knight in a Spanish village, only to return and have things not go so well for him.

“The Man Who Killed Don Quixote” is a long-term passion project of Gilliam’s, on which he first started pre-production in 1998 — with Johnny Depp attached as Toby. The film’s initial failure to get off the ground turned into “Lost in La Mancha,” a 93-minute movie originally intended as a “making-of” film that ended up being a 2002 documentary chronicling its own downfall, which included damage from a flash flood and a back injury for the film’s original Quixote, Jean Rochefort.

The latest episode is also not the first time money problems have caused a delay.

Back in September 2010, during a later go-around, Gilliam lamented that “the financing collapsed” at the Deauville American Film Festival, telling the audience he should have been shooting the movie right then.

At the time, Robert Duvall was set to play Quixote and Ewan McGregor was also lined up for a role in the film.