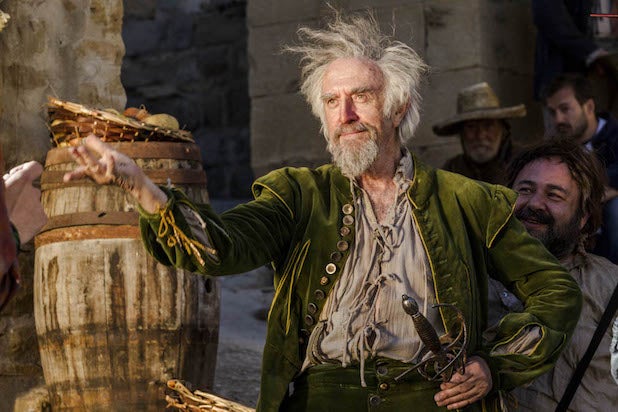 Terry Gilliam’s “The Man Who Killed Don Quixote,” is finally getting some good news.

The film will now get a theatrical release along with its previously announced video-on-demand release at the end of this week on April 19, distributor Screen Media announced Monday. “Don Quixote” was at first only available to be seen as part of a one-night-only theatrical event on April 10 from Fathom Events, but the success of that screening prompted a wider theatrical release.

“The Man Who Killed Don Quixote” will roll out in New York, Los Angeles, San Francisco, Austin, Texas and other top markets starting April 19. The film will also be released on all major VOD platforms on the 19th as well and will continue to expand theatrically throughout the spring and beyond.

In an interview with TheWrap, Gilliam had expressed his frustration that the film would only be getting a VOD release after its one-night-only screening.

“I’m not necessarily a fan of it, but that’s the world we’re living in. That’s the reality,” Gilliam said. “I think it’s just sad that people end up staying at home, probably alone watching something rather than being part of a communal experience. This thing, when we play it with big audiences is fantastic, because it’s just bubbling the whole time. People have very different reactions to different parts of it, but that’s the joy of it as far as I’m concerned. It will be just lonely people sitting alone at home. That’s a really sad way of experiencing this film.”

It’s the story of Toby (Driver), a frustrated filmmaker and disillusioned advertising executive, who becomes pulled into a world of time jumping fantasy when a Spanish cobbler (Pryce) who believes he is Don Quixote, mistakes Toby for his trusted squire Sancho Panza. Pulled further into the cobbler’s world, Toby gradually becomes unable to tell his dreams from reality.

“Fathom’s premiere model worked extremely well for ‘The Man Who Killed Don Quixote’ and we are thrilled to see the film getting a wider theatrical run,” Ray Nutt, Fathom Events CEO said in a statement. “Our one-night screening helped build awareness, generate fan excitement and create media interest that will only grow as the film continues downstream.”

“We are thrilled that so many fans came to see the movie in theaters during our nationwide one-night event with Fathom,” David Fannon, president of Screen Media, said in a statement.  “In response to the demands of those who missed it, we thought we better hurry up and give them another chance to see it. They’ve already waited long enough to see the results of Terry’s epic journey.”