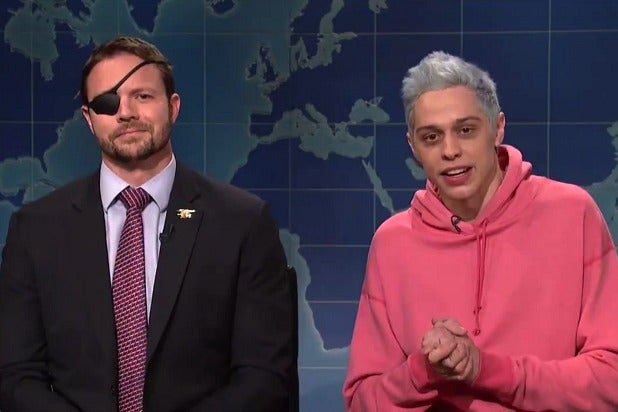 Dan Crenshaw, the Texas Republican who shared some friendly screen time with Pete Davidson after Davidson mocked Crenshaw’s war injuries during “Weekend Update,” says he reached out to the comedian in response to a disturbing Instagram message over the weekend.

On Saturday, Davidson said in an Instagram post: “I really don’t want to be on this earth anymore. I’m doing my best to stay here for you but i actually don’t know how much longer i can last. all i’ve ever tried to do was help people. just remember i told you so.”

Davidson deleted his Instagram account soon after, and he appeared that night on “SNL,” but friends and fans were left worried.

Monday morning on Houston NBC affiliate KPRC, Crenshaw said he reached out to Davidson on Sunday to talk and offer support and encouragement.

Also Read: Ariana Grande Freaks Over Pete Davidson's Message of 'I Really Don't Want to Be on This Earth Anymore'

“It was pretty devastating. You don’t want to see someone in that kind of position, to the point where they’re actually putting out a cry for help on social media,” Crenshaw said. “We don’t go back very far, we’re not good friends, but I think he appreciated hearing from me.”

“What I told him is this,” Crenshaw continued. “Everybody has a purpose in this world. God put you here for a reason. It’s your job to find that purpose. And you should live that way, know your purpose and not expect it to be given to you by anyone else. And know that you have value, and that you do more good than you realize for people.”

On the Nov. 3 episode of “SNL,” Davidson made fun of Crenshaw’s appearance. The next week, Crenshaw appeared on “SNL” to return the favor in a well-received bit during “Weekend Update.”

Responding to what appeared to be a call for help from comedian Pete Davidson, @DanCrenshawTX with me for #HouNewsmakers EXTRA talks about his response and phone call. https://t.co/BRiFwhBjD8 pic.twitter.com/GpqlUCPXpw

The oldest U.S. president, who died Friday at age 94, was a big fan of the comedian’s impression

"President George Bush Talks About the White House Drug Problem" (1989) Dana Carvey proved to be a gifted impressionist in his long run on "Saturday Night Live," nailing the cadence of George H.W. Bush's New England speaking voice, as seen in this sketch that runs through multiple issues of the late '80s.
View In Gallery