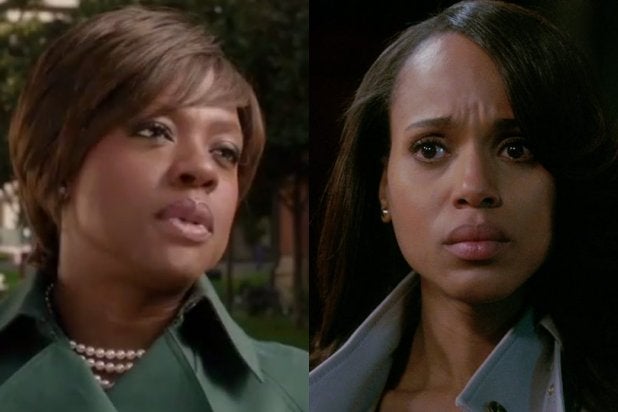 (Spoiler alert: Please do not read on if you have not yet seen the midseason premieres of “Scandal,” entitled “Run,” and “How to Get Away With Murder,” entitled “Hello Raskolnikov.”)

ABC’s TGIT lineup returned Thursday night and promptly reclaimed its place atop the social media charts. Both “Scandal” and “How to Get Away With Murder” shared dominance on the top of Twitter’s charts as fans of the former tried to recover from Olivia Pope’s crazy mind trip while keeping up with the new twists and turns on “HTGAWM.”

Olivia Pope’s (Kerry Washington) kidnapping turned out to be far more complicated and well thought out than first imagined. Not only did they effectively fool Jake into thinking she was in a car peeling away at the close of the mid-season finale in November — they were actually in the apartment across the hall — but her entire abduction wasn’t quite real either.

Also Read: Viola Davis Teases ‘How To Get Away with Murder’ Return: ‘It Will Be Nothing You’d Ever Expect’

While she thought she and fellow prisoner Ian were in a cell in Sudan, it turned out that the entire thing was an elaborately conceived studio set. And, of course, Ian was in on it the whole time. He just took advantage of a vulnerable Olivia to try and pump her for information, learning that the president would be very keen to see her rescued.

It was an unusual episode, with the rest of the cast appearing only in Olivia’s delirious dream sequences, but it was certainly a powerful one and a brilliant acting performance from Kerry Washington.

At the end of the hour, Ian revealed himself and said that this was just the beginning. It’s going to be a long wait for the next episode.

Luckily, Shondaland fans could slide right into the other most bonkers show on television. While Olivia Pope was completely out of control, Annalise Keating (Viola Davis) seems to always have at least some control of the chaos swirling around her.

Fans were left stunned when Keating said “Thank you” to Wes in the closing moments of the show’s midseason finale. She knew about the murder the whole time? Well, it turns out she did a lot more than just know about it.

It was Annalise who told Wes exactly how to dispose of her husband’s body. And now that we know she was fully aware of the murder, she pointedly tells Connor (Jack Falahe) and Michaela (Aja Naomi King) that she will help them get away with it, giving the show’s title a whole different meaning than it initially had.

Now this is a show about the complexities of covering up a high-profile crime. And already there’s a major problem. The kids went off the script when it came to disposing of Sam’s body. They were supposed to incinerate it. Instead, they chucked it in a dumpster.

Marcia Gay Harden made her debut as Sam’s sister, hoping to find out the truth of what happened to her brother … and you don’t cast Marcia Gay Harden unless she’s going to have a major role to play. So expect that very large loose end to come back and become a real problem for Keating and her students.