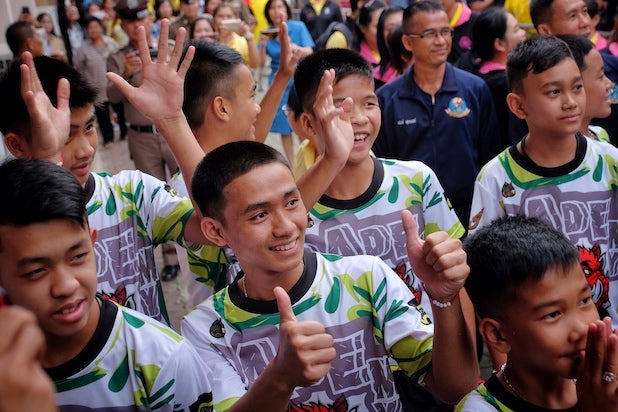 Netflix and SK Global officially announced Tuesday that they have acquired the rights to produce a film about the rescue of a Thai youth soccer team from a flooded cave in 2018, with “Crazy Rich Asians” director Jon M. Chu directing alongside Thai filmmaker Nattawut “Baz” Poonpiriya.

The two companies were granted the rights by 13 Thumluang Company Limited, a company set up by the soccer team and their coach to handle life rights and related intellectual property rights related to the team and their rescue.

“We are grateful for the opportunity to thank the people and organizations from Thailand and around the world who came together to perform a true miracle, by retelling our story. We look forward to working with all involved parties to ensure our story is told accurately, so that the world can recognize, once again, the heroes that made the rescue operation a success,” said Assistant Coach Ekkapol “Coach Ake” Chantapong, spokesperson of 13 Thumluang Co. Ltd.

“Like the rest of the world, we were riveted by the news of the Thai cave rescue. With the entire globe watching, this tragic human drama transformed into a beautiful, inspirational story of human beings saving other human beings. Not only did this show the best of the human spirit overcoming even the worst of circumstances, it proved that we are stronger when we work together,” said Chu in a statement.

“Which is why, with the support of the Thai government and our partners at Netflix, SK Global and Starlight, we are honored and grateful to be able to share the full story of this massive, international effort in a unique multilingual format that will allow us to work with filmmakers from all around the world, like the amazingly talented Nattawut ‘Baz’ Poonpiriya, who understand the nuances and details of the local community in which this story unfolds.”

Chu’s plans to develop a film about the rescue with SK Global were first reported last July, and was one of three planned films about the subject. Universal also announced a big budget adaptation of the rescue last year, while a third production directed by Thai-Irish filmmaker Tom Waller, is currently in post-production. That film, titled “The Cave,” is aiming for a July release.