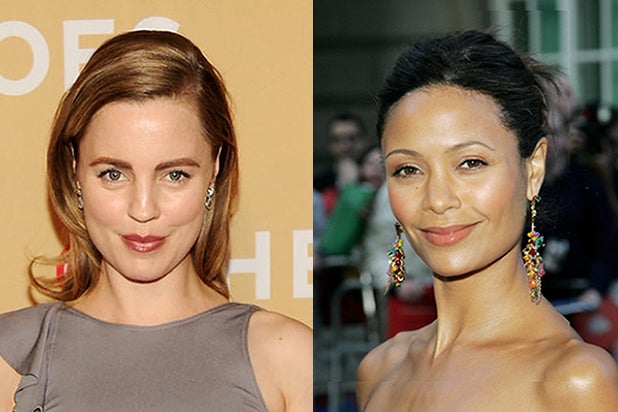 Thandie Newton and Melissa George have been cast in NBC’s domestic drama miniseries “The Slap,” which centers around the fallout from a child who is slapped at a party.

Adapted from a novel by Australian author Christos Tsiolkas and an Australian television miniseries, “The Slap” is slated to run for eight episodes.

Newton, who won a BAFTA award for her turn in “Crash,” will play Aisha, Hector’s wife and a mother of two. She’s said to be an oft-stressed, deeply philosophical character. Newton also appeared on “ER” for several seasons and will appear in the upcoming J.J. Abrams series “Westworld.”

George, a Golden Globe nominee for her role in HBO’s “In Treatment,” has been cast as Rosie — Gary’s hippy wife and mother to 5-year-old Hugo. Her meddlesome character is defensive about her decision to keep Hugo at home rather than send him to preschool. George also stars on “The Good Wife.”

“The Slap,” from Universal Television and Matchbox Pictures, is written by Jon Robin Baitz (“Brothers & Sisters”) and will be directed by Lisa Cholodenko (“The Kids Are All Right.”)

The executive producers include Baitz, Walter F. Parkes and Laurie MacDonald (“Gladiator,” the “Men in Black” franchise), Ted Gold (“Three Rivers”) and Tony Ayres, a veteran of the Australian series.