Anyone looking to understand Hollywood’s creative and economic prospects would be well advised to keep an eye on Jordan Levin, founding partner and CEO of Generate, the management and cross-platform production company launched in 2006. Levin is best known for co-founding the WB, where he where he helped develop a distinctive brand of young-skewing shows (“Dawson’s Creek,” “Gilmore Girls,” “Buffy the Vampire Slayer”) and served as the youngest-ever network CEO. He spoke with Eric Estrin about making the most of his college education — and what he did with his bar mitzvah money.

When I was a kid, I used to take the old TV Guide Fall Preview issue and, just based on the descriptions, write whether I thought the shows would stick or not. So I always sort of fantasized about running a network. 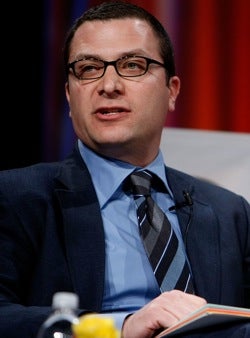 Because of my father’s work in advertising, I grew up knowing peripherally what was going on in media — ratings and the transaction of advertising and commerce and getting his reports when he would come back from the upfronts and looking at those.

I was interested in anything that would allow me to feel like I was getting closer to Hollywood.

Back then — before video recorders — the only way to see old movies was to go to the revival theater. I remember I used to go down to the Biograph Theater in Chicago and see the silent clowns — you know, Buster Keaton, Charlie Chaplin, Harold Lloyd, I loved all that. This is when I was 8, 9, 10, 11, 12. Mostly my grandfather would take me. And then I used my bar mitzvah money, somewhat misguidedly, to purchase the first consumer VCR, that first Betamax, and started to collect movies. I think a blank Betamax tape was like $15, and I spent a lot of money collecting movies.

I went to the University of Texas down in Austin and studied film and TV theory and criticism and did a lot of entertainment industry studies work and a lot of creative writing. Then, my freshman year, my father got this call to see if he had any interest in being the head of marketing for the theatrical division at Disney — they were looking to hire someone from outside the entertainment industry. He ended up moving the family, while I was in college, from Chicago to L.A.

I worked on a number of movies with some pretty high-profile producers like Laura Ziskin and Lynda Obst and Debra Hill, and at that point Stacy Sher worked for them, and that led to working with a number of those producers as a sort of development intern.

Out of college, I joined Disney as a program associate; it was ’89, and I was fortunate to join what was then, relatively speaking, a startup division. Katzenberg and Eisner had come over in ‘84, and they were rebuilding the company brick by brick. Then along with Rich Frank and that senior management team, they started to focus on the TV division — they brought in Garth Ancier from Fox and Dean Valentine from NBC, and they started to put that division together.

The studio side at the time was pretty powerful. Even though the networks were powerful, the studios had the talent — and that was before the vertical integration because of the repeal of different laws. It was fun to be part of that volume and fun to be part of building that division, and it was fun to be able to spend so much time on the stage and be able to work with so many comedy writers.

And that’s how we got trained.