The Year of Netflix continued chugging along on Monday, with the streaming powerhouse hitting a record high on Wall Street of $295.64 per share. 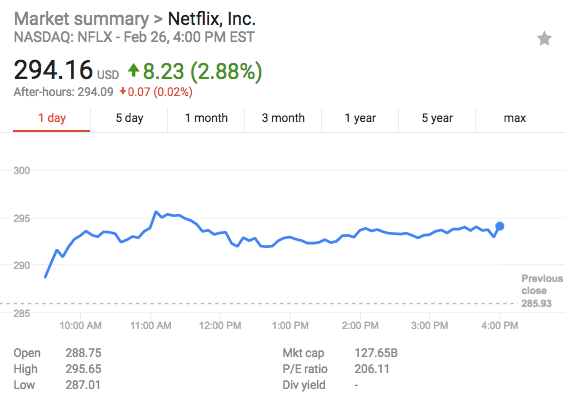 Netflix closed above $294 a share on Monday (via Google)

If you threw your Christmas (or Hanukah) bonus into Netflix at the end of 2017, good work, because the bet has already paid off; the Los Gatos, California-based company has seen its share price increase about 50 percent since January 1, when the company opened trading at $196 a share. Netflix now has a market cap of $127.5 billion — which, just for kicks, is about 2,550 times more valuable than if Blockbuster had decided to shell out $50 million for the company in 2000.

Netflix’s run was spurred on by its glowing Q4 earnings report in January, with the company adding a record 8.3 million new subscribers. The fresh streamers pushed Netflix to 117.6 million customers across the globe. Investors have shown a willingness to overlook Netflix’s heavy spending as it racks up subscribers and inks content deals — like its recent $300 million partnership with mega-producer Ryan Murphy.

And according to CEO Reed Hastings, most of those new subscribers will be coming from outside the U.S. Speaking last week in New Delhi, Hastings said “the next 100 million [subscribers] for us is coming from India.”