The second season of the Max Original comedy sketch show “That Damn Michael Che” will debut on Thursday, May 26 with all six episodes, HBO announced on Tuesday.

In the trailer, also released on Tuesday, Che has to tell his “Saturday Night Live Weekend Update” co-host Colin Jost, who’s heading straight for the omelet bar, that he’s at an all-Black breakfast event.

Each episode focuses on a single topical theme, like religion. In the clip, Che is less than thrilled when the pilot (David Alan Grier) on his flight instructs everyone to say, “Jesus, take the wheel.” “Shouldn’t the pilot be taking the wheel?” the comic asks his seatmate.

As Che also tells his audience during a stand-up routine, “Talking to god is like getting your therapist’s answering machine. Hey god, it’s me again. I don’t know if you’re getting these.” 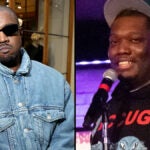