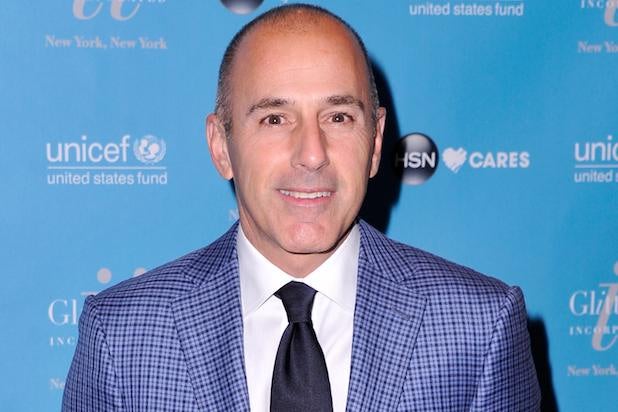 Matt Lauer, who was fired from NBC’s “Today” after accusations of sexual harassment surfaced, has made light of the issue in the past.

Back in 2012, he joked in a “Today” segment that he was the victim of sexual harassment from his “Today” colleague Willie Geist. Savannah Guthrie threw it over to investigative correspondent Jeff Rossen as though the story and Lauer’s victimhood were real. In the sketch, surveillance camera footage captures Geist spanking Lauer on the buttocks, launching a full-scale “Today” investigation.

Throwback to 2012 when Matt Lauer was the “real victim” of sexual harassment on the Today show ???? pic.twitter.com/mYdnhEV2wv

“I thought that would be the end of it, but then he…Why deny it? If you did it, own up to it,” said Lauer in a faux confessional video set to somber piano music.

Geist even joked back that Lauer himself had more to answer for as they watched back the footage of Lauer playfully patting Geist in return. Even more ironic — or troubling — is that the two asked their next guest, Dustin Hoffman, who himself has been accused of sexual misconduct, if Lauer and Geist’s behavior was inappropriate.

Around the time of this sketch in 2012, Lauer’s then-cohost Katie Couric said he “pinches me on the ass a lot” in a segment with Andy Cohen.

On Wednesday, news emerged that accusers said Lauer harassed them by gifting a sex toy, exposing himself and more.

NBC News chairman Andy Lack explained the decision to part ways with Lauer in an internal memo to employees and said a “detailed complaint” against the host had been filed by a staffer on Monday night.

Also Read: How Matt Lauer's Firing Could Impact 'Today' Show in the Ratings

“It represented, after serious review, a clear violation of our company’s standards,” Lack wrote. “While it is the first complaint about his behavior in the over 20 years he’s been at NBC News, we were also presented with reason to believe this may not have been an isolated incident.”

In a statement to TheWrap, the accuser’s lawyer Ari Wilkenfeld said he was proud of his client and pleased with how NBC responded to her accusations.

“My client and I met with representatives from NBC’s Human Resources and Legal Departments at 6 p.m. on Monday for an interview that lasted several hours,” said Wilkenfeld, of the firm Wilkenfeld, Herendeen & Atkinson. “Our impression at this point is that NBC acted quickly, as all companies should, when confronted with credible allegations of sexual misconduct in the workplace.”