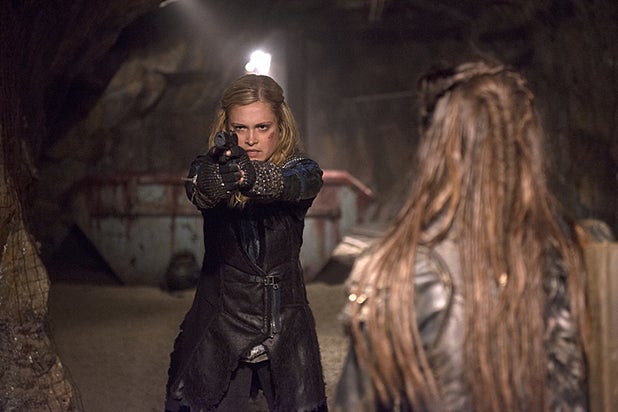 After a season of heartbreak, bloodshed and betrayal, the juvenile delinquents at the center of the CW’s “The 100” find themselves standing alone and facing seemingly impossible odds as the second season of the post-apocalyptic drama comes to an end.

Clarke Griffin (Eliza Taylor) was prepared to go into an all-out battle against Mount Weather with Lexa (Alycia Debnam-Carey) and her army of Grounders by her side, but the Commander took a deal with the enemy that left Clarke and her people on their own to face certain death instead.

It’s all part of the plan to get Clarke to the breaking point, Rothenberg told TheWrap. “The theme of the season has been about how far will you go to save your people?” he said.

Clarke has already gone pretty far for just that, including allowing a missile to hit the Grounder village TonDC with hundreds of people in the blast radius, including Bellamy’s (Bob Morley) sister Octavia (Marie Avgeropoulos), who miraculously survived but has already found out the truth and is not happy with her leader.

But it seems Clarke can still go even further in the name of saving the 44 teenagers still trapped inside Mount Weather.

Showrunner and executive producer Jason Rothenberg previewed the episode, why he decided to pull the battle plan at the last minute, and where the story might go in Season 3.

Throughout the season, it seemed like we were headed for a big showdown between the Mountain Men and the Grounders and Sky People. Can you talk about the decision to leave the grounders out of the final battle?
I think everyone was expecting this big battle, the way Season 1 ended with a big battle, but it was more interesting to pull the rug out at the last minute.

Clarke and especially Octavia have been trying to work with the Grounders for nearly two seasons now and this seems like the biggest setback yet. Will they keep trying?
In the season finale, there is no trying to make things work with the Grounders, there is no time for politics or anything like that. In the future, certainly the possibilities are there to explore the goings ons of the other clans. The decision Lexa made will have ramifications. Clarke also has this secret about the missile in TonDC that could affect things there. Plus, the legend about Clarke of the Sky People is growing, so there are many possibilities to explore on that front.

See an inside look from the finale, “Blood Must Have Blood Part 2” below.