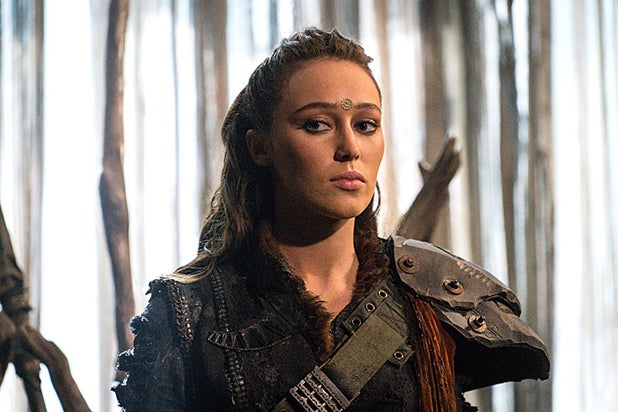 (Spoiler alert: Please do not read on if you have not watched Thursday’s episode of “The 100.”)

Seriously, do not read on if you haven’t seen the latest episode of “The 100,” where three seasons worth of sci-fi mythology finally came together.

The grounders, seemingly primitive as far as technology goes, have been led all along by a piece of Artificial Intelligence, the episode “Thirteen” revealed.

As Lexa (Alycia Debnam-Carey) died in front of a heartbroken Clarke (Eliza Taylor), the most shocking moment came later as Titus (Neil Sandilands) cut open the dead commander’s neck to allow the AI to climb out and prepare itself for its next host.

Below, showrunner Jason Rothenberg broke down the shocking and game-changing episode, defending his decision to kill off the fan-favorite Lexa and what sorts of questions Clarke and her friends face going forward.

Can you walk us through the decision to kill off Lexa?
Back at the beginning of the season, I knew Alycia was on another show, and I was afraid I was not going to have her at all. I negotiated with AMC and they were gracious and cool enough to let me have access to her for a certain number of episodes, but it had to end by a certain date, because she had to go to work [on AMC’s “Fear the Walking Dead”]. I knew that going in. I had to tell a story that had an end point. That didn’t necessarily mean it had to end in the death of that character, she could have walked off into the wild blue yonder, she could have … who knows what she could have done.

But at the same time, I was thinking about the bigger story we were telling and we had these two huge stories that I loved … but there was no unifying idea. And then I started to think about how we had this idea of reincarnation already baked into the show. In Season 2, Lexa revealed the grounder commanders are reincarnated. I didn’t want to throw that idea away as nonsense, but I also didn’t want to say it was actual spiritual reincarnation. I wanted to not throw it away but not authenticate it. So I came up with this idea of technological reincarnation.

When I hit upon that, I realized that was it, that was the sticking point of the season. If we could make that moment work in episode 7, when the AI climbs out of the back of Lexa’s neck, we realized everything she said was true. The second AI was here all along. The conclave system and the whole idea of the commander, all of that, was descended from this technological thing. Yesterday’s technology becomes today’s religion.

Long story short, if you’re going to tell a story about reincarnation, technological or otherwise, you sadly have to get to death before you get to the rest of it. So all of those factors came into play when I was trying to decide how to end that character’s story.

How aware were you of TV’s history of killing queer characters, and how much of that did you take into account when writing this story?
Of course I am aware, much more so now than I was then. But this is a world where characters die. Her sexual orientation factored into her death as much as Finn’s sexual orientation factored into his, which is to say, not at all. We ended up having to tell a very difficult story and I understand its place in the TV lexicon as a trope, and I hate that it’s a trope. I hate that that’s a story people turn to to somehow say it’s bad. But that’s not at all what we’re doing. We’re not saying she’s being punished because she’s a lesbian. We’re saying that it’s part of a bigger story that we’re telling, in a world where no one is safe.

We know she’s back in the finale but is that the only time we’ll see her again?
Well, I can’t answer that, but I will say that Lexa will continue to influence the story. She will haunt this world. Clarke was in love with her and will now need to do what people do when people you love are tragically and suddenly taken away from you, which is to compartmentalize herself emotionally so she can go on. She will be influenced by Lexa’s legacy and try to fulfill the legacy of the dream Lexa had for peace in the world. She will have to compartmentalize herself to be the hero we know her to be.

And the flame has now been established as a thing, as a piece of tech that may contain the spirit of the commander, one of which is now Lexa.

How much of Lexa was Lexa, and how much of her was the AI?
That’s a great question that we get into in the season going forward. I will say that as Becca explained in flashback, ALIE 1 is not human, does not understand what it means to be human, and that’s what allowed her to essentially end the world in order to save it. Becca’s salvation is tied up in the second AI. Can she right the wrongs of her creation? By creating the second version of the code, which will not exist separate from human consciousness, so it is human by many regards.

Lexa was a normal girl who had a normal grounder upbringing and she happened to have nightblood. She went into the conclave and she won her conclave and she got the flame. We will understand what it means later in terms of does it change you or doesn’t it, but – slight spoiler – it deepens what’s already there. Lexa is who Lexa is, she’s just augmented by this piece of technology.

We’ve seen grounders just kind of existing in their society, but do the AI and Lexa and other commanders have a bigger plan we don’t know about yet?
There are reasons why Lexa didn’t even know she had an AI inside her, she has no idea what an AI is. To her, she genuinely believes she was endowed with the spirit of the commander. It’s called the Ascension Ceremony when you receive the flame, and we will get into all of this going forward. You receive the flame and you receive the wisdom of the commanders, and to her, it’s a spiritual thing, a religious thing. We’re playing with how technology in the past becomes religion in the future and that’s something we’re definitely exploring in the future.

Also Read: 'The 100' Showrunner: Things 'Spiral Out of Control' in Season 3

Titus didn’t seem to know anything about the chip that was the key to the City of Light. Is it safe to say he doesn’t know about ALIE 1 and the City of Light?
I don’t want to spoil too much about the two different paths the AIs have traveled, but it’s safe to say that ALIE 1 was locked up in that house for 97 years, and pretty much nobody out in the world knows about her, until she gets out with Jaha’s help and is now proselytizing the ways of the City of Light. Everything is connected and will be connected but the various strands of that technology aren’t necessarily aware of one another.

Looking at the immediate future, Clarke and Murphy are locked inside Polis and now a kill order is in place. What’s going to happen to them?
Emotionally, Clarke will be devastated by the loss of Lexa. She will need to figure out a way to hopefully move on and ensure the safety of her people. Lexa was kind of helping her do that, with her willingness to blockade them and give them time to solve their problems themselves. Now that she’s gone, that might not be the case anymore. If the wrong person were to ascend and become the next commander, Skaikru would be in deep trouble. Clarke is going to have to be on that story now — how can she save her people yet again?

Also Read: 'The 100' Star Alycia Debnam-Carey on Lexa's Return: 'I Can't Wait to Kick Some Ass'

And Murphy — I love the fact that Murphy is somehow entwined in this story. He’s kind of like our version of Forrest Gump, he’s sort of everywhere. Somehow he wound up at the center of everything, and becomes key to everything going forward in a really amazing way. I love his story going forward – a little bit of “The Man Who Would Be King.”

Clarke faces off against some mysterious figures as Abby and Kane try to survive Earth in the season premiere, titled “The 48”