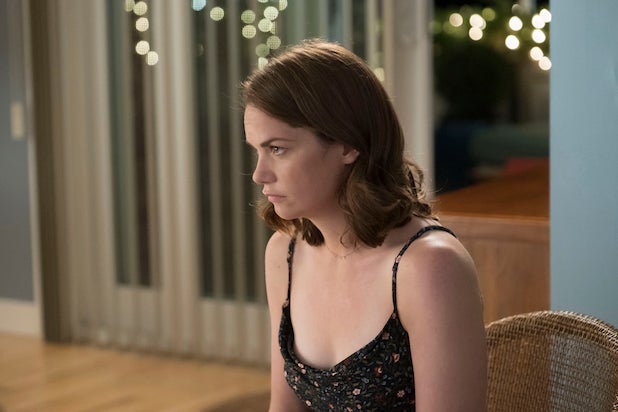 Former “The Affair” star Ruth Wilson is still “not allowed” to talk about why her character, Alison, was killed off late into the recently-wrapped Season 4. But Wilson is hinting more and more at why the decision for her to leave the show was not her own.

In an interview with the New York Times published on Wednesday, Wilson confirmed that her exit did not have to do pay inequality on Sarah Treem’s Showtime series (though she recently said co-star Dominic West had a higher salary than her) or a new role she wanted to pursue.

But here’s what she did say:

Also Read: Ruth Wilson Says She's 'Not Allowed' to Say Why She Left 'The Affair'

“It isn’t about pay parity, and it wasn’t about other jobs,” Ms. Wilson said. She added coolly, “But I’m not really allowed to talk about it.”

There was a meaningful silence. “There is a much bigger story,” she eventually volunteered, urging me, more than once, to contact Sarah Treem, a writer and producer of the show.

Appearing on “CBS This Morning” earlier this month, Wilson confirmed that she would not be returning to the Showtime drama after her character’s death earlier this season. “I’m not coming back, so she’s dead,” Wilson said, adding that despite the show’s fractured narrative, she believes her character had been murdered.

When asked about her departure, Wilson kept her answer short. “I did want to leave, but I am not allowed to talk about why,” she said, declining to explain further.

She did, however, seem to deny that the decision was tied to her previous comments regarding a pay disparity with her co-star Dominic West.

In a statement provided by Showtime following Wilson’s initial comments, the premium cable network said the decision was a creative one, which came at the natural conclusion of Wilson’s character’s arc.

Also Read: Gal Gadot in Talks to Star as Hedy Lamarr on Showtime Limited Series From 'The Affair' Creator

“We can’t speak for Ruth, but heading into season four everyone agreed the character’s story had run its course,” the network said. “Ultimately, it felt like the most powerful creative decision would be to end Alison’s arc at the moment when she had finally achieved self-empowerment. The impact of her loss will be felt as the series concludes next season. We thank the many fans who embraced the character of Alison and especially thank Ruth for her indelible work over the past four seasons.”

Treem gave the Times a similar statement in response to Wilson’s new interview: “The character of Allison had run its course. By completing her arc this season, the consequences of her death will lead to compelling storylines for our final season.”

Showtime declined to give an additional comment, and representatives for Treem and Wilson did not immediately respond to TheWrap‘s request for comment.