It’s unlikely you actually need to be more hyped up for this year’s Super Bowl halftime show, since we assume if you’re reading this post, you have absolutely excellent taste in music. To refresh your memory though, the Super Bowl LVI (56) halftime show will feature Dr. Dre, Snoop Dogg, Eminem, Kendrick Lamar and the great Mary J. Blige. Which, honestly, is a lineup so good they should cancel the game and just do three hours of only that.

Still, even if it’s only going to be about 15 minutes long, it’s going to be a GREAT 15 minutes, well worth watching the other three hours of non-musical genius football content. But if you are feeling a bit impatient and are having a hard time waiting for the game’s Feb. 13 kick off, we have just the thing to tide you over — an absolutely epic trailer for the halftime show that we’ve already watched five times in a row. See it for yourself right now:

I mean look, it’s an “Avengers Assemble” montage that begins with Eminem apparently composing “Rap God” with the help of his younger, Slim Shady-era self and it only gets more insane from there. Em receives a text that gets him out the studio and into a private jet. Next, we see Snoop driving at the head of a fleet of tricked out low riders while listening to “The Next Episode,” until he gets his own text. 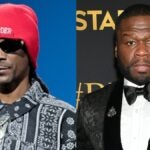 After that, Mary J. Blige shows up (looking fly as hell) at a fashion shoot while listening to her Dre-produced classic “Family Affair,” followed by Kendrick being (as usual) a sensitive genius, journaling while listening to “Be Humble.” And then, we cut to a pacific beach where, as “Still D.R.E.” plays, Dr. Dre walks down a beach that has morphed into a gigantic piano. Finally, all five of our heroes meet up at Sofi Stadium in LA, where, of course, Super Bowl 56 is taking place.

Anyway, the moral of the story here is that this is absolutely going to be one of the dopest-ever Super Bowl halftime shows. And also, our brains have been totally scrambled by this trailer. But we didn’t forget to remind you one more time that Super Bowl 56 is happening Sunday, Feb. 13, and for those of you who can’t attend, airing on NBC.