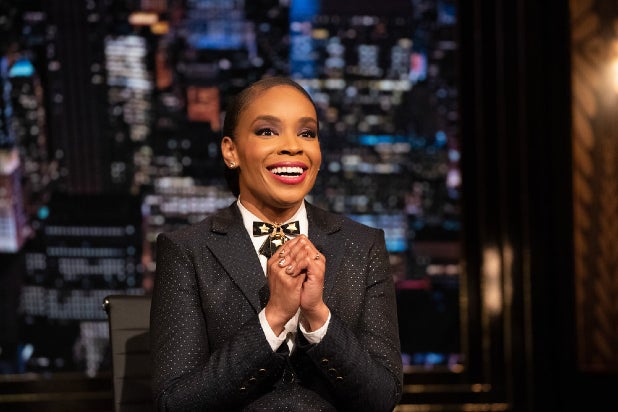 Peacock has extended late-night series “The Amber Ruffin Show” — again — this time for another 6 months. Now set to run through September, Season 1 will make it a full year. Just like a real late-night talk show.

“The Amber Ruffin Show” drops new episodes every Friday on Peacock. Tonight’s episode marks the final one of the previous time the series got an extension, which happened back in December.

“Amber Ruffin’s unique brand of comedy and effervescent personality allow her to shine on Peacock week after week,” Katie Hockmeyer, executive vice president of late-night programming at NBCUniversal Television and Streaming, said in a statement on Friday. “Each episode raises the bar with a variety of sketch material that is both culturally relevant and hilarious. We are so fortunate to have Amber at the forefront as Peacock paves the way for late-night in the streaming space.”

We agree with Hockmeyer: Ruffin was — and still is — a breakout performer on “Late Night With Seth Meyers.”

For those whom have not had the pleasure, here is the Peacock logline: “The Amber Ruffin Show” showcases Amber’s signature smart and silly take on the week’s news. No matter what’s happening in the world, Amber responds to it with a charming mix of seriousness, nonsense, and evening gowns. “The Amber Ruffin Show” is a topical late-night show with just the good parts – the comedy.

Seth Meyers, along with his “Late Night” righthand man Mike Shoemaker, are executive producers on “The Amber Ruffin Show.” As are Ruffin and head writer Jenny Hagel.

Tarik Davis is the program’s announcer. The series is produced by Universal Television, a division of Universal Studio Group, and Sethmaker Shoemeyers Productions.