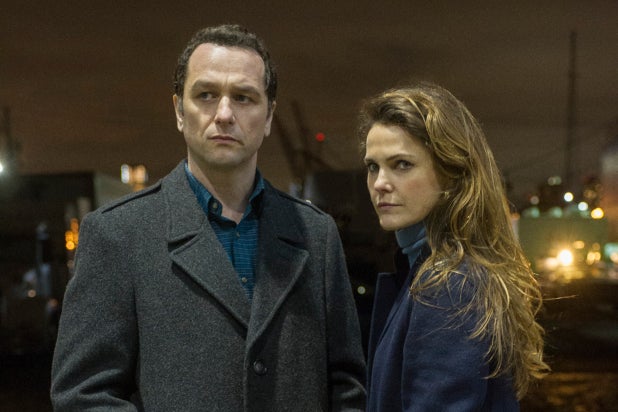 (Spoiler alert: Please do not read on if you haven’t watched Wednesday’s finale of “The Americans”)

FX’s Cold War spy drama “The Americans” wrapped its six season run on Wednesday with a gut-wrenching finale that left viewers with one final surprise.

Both Elizabeth (Keri Russell) and Philip (Matthew Rhys) Jennings made it out alive, with the show ending with both them back home in Mother Russia. For showrunners Joe Weisberg and Joel Fields, that was always the plan. “We came up with this ending a long time ago, back in the beginning of the second season,” Weisberg told TheWrap.

He said the past four seasons was a matter of filling in the gaps to get to that point. “It’s a little bit of a minor miracle that ending is still the one that we used.”

The episode focused mostly on the Jennings’ ex-filtration from the United States, including a confrontation six years in the making when FBI agent Stan Beaman (Noah Emmerich) finally realizes he’s been living next to Russian spies all these years. For the Jennings, the casualties in the final episode were more emotional than physical.

The episode began where the prior one left off: With Philip, realizing his cover may finally be blown, telling Elizabeth in a coded message that they have to escape the United States. The finale begins with the two of them deciding to leave their son Henry (Keidrich Sellati) behind, because he was unaware of his parents’ true identities. But the real gut-punch comes when, while on a train crossing the boarder into Canada, they spot their daughter Paige (Holly Taylor) on the train platform, having gotten off at the last minute to remain in America.

To both Fields and Weisberg, that ending hit the hardest.

Also Read: Russian Journalist Says He Faked His Own Murder to Catch Russian Agent Sent to Kill Him

“They were still together, but they had suffered this unspeakable tragedy,” said Weisberg, who added that if they “got that tragedy from some other place, like somebody dying for example, it didn’t land in the same way for us.” Fields said that they had versions where they ended up with one of the kids, but decided to leave the couple in the exact same place they were when they first met: Just the two of them in Russia.

“Of the different versions of this ending, that’s the one we kept coming back to,” said Fields.

Despite taking place during the waning days of the Cold War, “The Americans” never went anywhere near the fall of the Soviet Union (or more specifically, the fall of the Berlin Wall). The show’s narrative just ended up moving too slow.

“As we started to break Season 2, it became apparent to us that we were just moving very slowly in time in terms of our storytelling,” said Fields. “It just seemed impossible to us and I think we pretty quickly gave up on that.”

“The Americans” did end with quite a few plot threads hanging, one of them being whether or not Stan’s girlfriend Renee (Laurie Holden) was secretly a Russian spy. During their confrontation, Philip tells Stan that, though he has no way of knowing for sure, Renee may be a Soviet, but audiences (and Stan) are left without knowing the truth.

“I don’t think that we felt that every loose thread had to be tied up neatly in a bow. In fact, it shouldn’t be,” said Weisberg. “Is Renee really a spy or not? We didn’t think we really owed the answer to that question. We thought that that works fine as something the audience can wonder about.”