Looks like Batman has gone from The Dark Knight to garbage night!

Just kidding, but with “The Batman” currently back in production in Liverpool, England, a new set photo reveals the caped crusader, or in this case his stuntman, perched atop the Royal Liver building in a prop Batsuit that looks very similar to a trash bag or similar carrying bag. Check it out below. 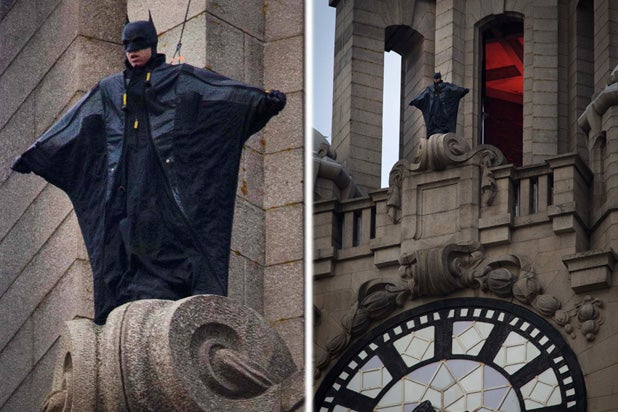 Batman’s cape obviously gives him the ability to glide like shown in previous films, like 2005’s “Batman Begins,” so it will be interesting to see the final end result once the cgi is added to the final shot.

The film directed by Matt Reeves will now hit theaters on March 4, 2022.

“The Batman” resumed production in the U.K. last month after a cast member tested positive for COVID-19. The film’s star, Robert Pattinson, was reported by Vanity Fair to have tested positive, though Warner Bros. did not comment on the identity of the member of the production.

Production first picked up on “The Batman,” directed by Matt Reeves, back at the start of September. The DC superhero film was shut down due to the coronavirus at Warner Bros.’ Leavesden Studios in the U.K. after being halted seven weeks into production back in March. The shoot still has roughly 11 weeks to go.

Depending on how the spread of coronavirus cases in the U.K. play out, “The Batman” could wrap shooting by the end of the year. Back in April, Warner Bros. pushed the release of the film to Oct. 1, 2021, from its original June 25, 2021 release date.

The cast includes Zoe Kravitz as Selina Kyle, a.k.a. Catwoman, Paul Dano as Edward Nashton, also known as the Riddler and John Turturro is playing Carmine Falcone. Andy Serkis will play Alfred Pennyworth and Colin Farrell will portray The Penguin. Jeffrey Wright is playing Commissioner Gordon, Peter Saarsgard is playing the role of Wasserman, while Jayme Lawson is set to star as well.