“The Big Short,” Paramount’s Oscar hopeful about the nation’s economic meltdown, cashed in on its recent awards nominations in its limited box office debut this weekend, taking in $720,000 from just eight theaters.

That’s an impressive $90,035 per-theater average for the dark comedy, which was directed and co-written by Adam McKay and nominated for Best Comedy by the Golden Globes on Thursday. That was one day after the cast, topped by Brad Pitt, Steve Carell, Christian Bale and Ryan Gosling, was nominated for best ensemble at the Screen Actors Guild Awards.

Opening weekend audiences gave the R-rated “The Big Short” an “A” CinemaScore, which was in line with the critics, who have it at 86 percent positive on Rotten Tomatoes.

“The awards certainly helped,” Rob Moore, Paramount Pictures vice-chairman, told TheWrap, “and I think the audience was pleasantly surprised to find that a movie with this subject matter was very entertaining and had a lot of laughs in it.”

Much of the credit for that goes to McKay, who previously directed the comedy hits “Anchorman” and its sequel, “The Other Guys” and “Step Brothers,” and brought some of those sensibilities to the project.

“You don’t immediately think of such a troubling time for our country as comedy, but that’s what Adam brings and it helps us maybe laugh at little at our mistakes,” said Moore. The studio plans to go wide with “The Big Short” on December 21. 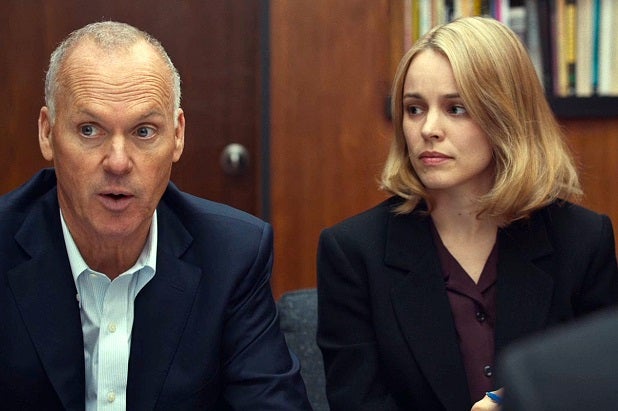 Open Road’s “Spotlight,” the R-rated, drama about the Boston Globes’ coverage of the Catholic Church molestation scandal  (photo above), was also a big winner at the Globes and SAG Awards nominations, and parlayed that into another strong showing.

Written and directed by Tom McCarthy, “Spotlight” notched its fourth straight weekend in the top ten nationally and crossed $20 million in its eighth week of release as it took in $2.5 million. That’s a strong $2,304 average on 1,089 theaters, up 109 from last week, and just a 10 percent drop.

After three weeks in four theaters, the Weinstein Company raised the screen count for “Carol” to 16 locations and the lesbian romance starring Cate Blanchett and Rooney Mara took in $336,924 for a very good $21,057 per-screen average. Its domestic total is now $12.2 million.

Fox Searchlight’s “Brooklyn,” which stars Golden Globes best actress nominee Saoirse Ronan, expanded to its widest run and took in $1.9 million from 947 theaters for Fox Searchlight. That’s a $2,050 per-screen average and raised the overall domestic total for the film, directed by John Crowley and written by Nick Hornby, to $14.2 million after six weeks.

In its second weekend, Spike Lee‘s “Chi-Raq” grossed an estimated $573,580 on 285 screens. That’s a per-screen average of $2,013 for Amazon Studios and Roadside Attractions, which has taken in an estimated $2.1 million in 10 days.