“The Big Short” will give you a headache, but in the best possible way. Based on Michael Lewis‘ nonfiction best-seller, this postmortem on the 2008 financial crisis overflows with facts, jargon, rage, cynicism, jokes, insults, and A-list stars.

Unless you’re a Wall Street trader or a CNBC fanatic, you’re bound to learn something new about how unregulated capitalism set itself on fire less than a decade ago — and how the banking industry has retained its tight grip on both the kerosene and the matches.

For all the millions of jobs, houses and pensions lost, though, talking about how the economy was set on a path to ruin is one of the surest ways to bore and confuse your audience. Director Adam McKay (“Anchorman 2: The Legend Continues,” “The Other Guys,” “Step Brothers”) knows this, which is why he practically invents a whole new genre — let’s call it the lecture-comedy — for his latest film.

At least half of McKay and Charles Randolph’s script is devoted to explaining things like subprime mortgages and synthetic CDOs. The film (wisely) never overestimates viewers’ attention spans, embracing instead a kitchen-sink approach to any technique that might work: Ryan Gosling talking to the camera, Margot Robbie defining financial terms while taking a bubble bath, tumbling Jenga blocks, the most obvious visual metaphors to be conceived.

A credit-ratings agency employee (Melissa Leo) willfully blind to the tanking housing market wears sunglasses in her office. An SEC regulator (Karen Gillan) looking for a job in the industry she’s supposed to be overseeing sleeps with a banker. After requesting so much mental bandwidth in other departments, the film does us a favor with these undemanding images.

The screenplay’s Niagara-like cascade of information can be exhausting and impossible to keep up with, but its ambitious and innovative format serves both its subject matter and its dramatic core rather well. The one major misstep is in the restless camerawork, which bobs and weaves and zooms and zags with nausea-inducing regularity. (This might contribute to the headache.)

Taking place between 2005 and 2008, “The Big Short” follows a small group of eccentric or up-and-coming investment-banker types — mostly separate from each other — who are the only ones to see the meltdown of the housing market coming. Being money men, they follow their first instinct: to profit off the impending economic apocalypse by shorting, or betting against, the real-estate sector. Portrayed by Gosling, Christian Bale, Steve Carell, Finn Wittrock, John Magaro, and Brad Pitt, they’re financial heretics under enormous pressure to be right. If their calculations are incorrect, for example, Bale’s Michael Burry could wipe out his $300 million company. 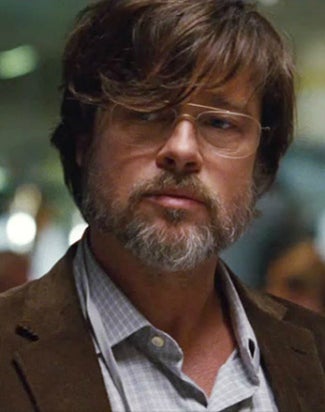 Playing variations on the smug, obsessive genius, Gosling, Bale, and Carell provide the bro-y bluster that fuels the film’s impatient pacing and combative sense of humor. In contrast are Wittrock and Magaro’s Jamie Shipley and Charlie Geller, self-questioning small-timers who hit the jackpot, so to speak, when they become the protégés of retired investing virtuoso Ben Rickert (Pitt). Supplying the film’s ethical center is Carell’s Mark Baum, a rude, reedy loudmouth who hates Wall Street’s corruption as much as he benefits from it.

Most, if not all, viewers will know going into the movie that this sextet will, despite their many setbacks, make millions off their short. McKay initially gets us to root for these smartest guys in the room — which isn’t hard to do. The stakes for them are colossal, and somehow get even larger when it turns out that the market initially seems too corrupt to reward them for their Cassandra-like insights into the future. But in a sophisticated narrative pivot, the film then complicates the moral picture by reminding us that its main characters aren’t really doing anything more than exploiting other people’s misery.

Those dudes may bask in the spotlight, but “The Big Short” is really interested in ordinary citizens, whose lives we see in heartbreaking glimpses. The film’s compassion for everyday Americans — whom the bankers chose to forget about when devising the various valves and switches that triggered the Great Recession — along with its energetic determination to entertain, enlighten, and infuriate make it a laudable surprise.

“The Big Short” might be too pessimistic to serve as a call to action, but it certainly wants us all to at least know how we’ve been screwed over. And if that requires instruction in what a “bespoke tranch opportunity” is, McKay really doesn’t mind telling you all about it.