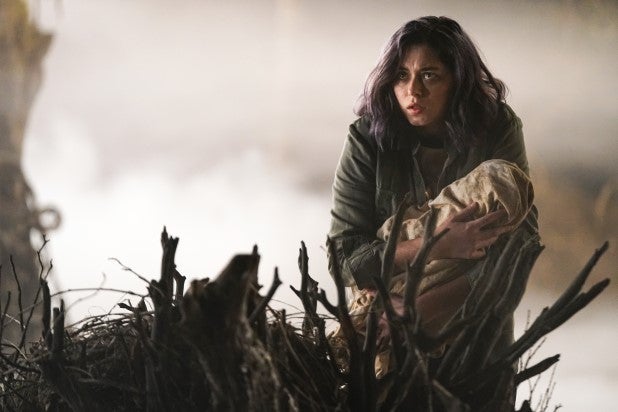 Season 2 of Crypt TV’s “The Birch” premieres Friday on Facebook Watch, introducing a new main character — Jordyn DiNatale’s Rory — and a new setting. TheWrap caught up with series writer Casey Modderno to talk about the creative process of expanding “The Birch” universe, and how her trans experience and the pandemic influenced it.

The description for the second season of the supernatural series reads: “The Birch” follows newcomer Rory (Jordyn DiNatale) who calls on the vengeful woodland tree monster, the Birch, to help her combat the cyberbullying and harassment from her peers. Meanwhile, Evie (Xaria Dotson) gets her shot at redemption as she tries to stop Rory from making the same mistakes she did, leading to many thrilling and supernatural adventures along the way.

Modderno wanted to play with the feeling of isolation that everyone has been feeling while quarantined while also being mindful of production limitations (the series shot during fall 2020).

“Everyone felt isolation; it helps tap into the mental state of the main characters,” Modderno explained. “Creatively, we’re not going to set it during an active school year. So it’s a girl who feels really alone on summer vacation on summer break, she doesn’t have an in-person social network to give her support. That’s where you see the cyberbullying elements play — she uses social media to try to get validation. So when it’s turned against her, it really does feel like her world is collapsing. She doesn’t have the support networks. I think that that’s something that feels super relatable.”

Rory’s character is also informed by Modderno’s experience as a trans woman.

“Rory is a character who has rage borne from isolation. I’ll see people say transphobic and hateful comments online, people that I’ve never met in my life,” she explained. “I have a fleeting blood wish against them. But then I’m like, ‘Wait, chill out. You’re a grown woman, you can’t let this stuff get to you.’ But I think we all do, I think we’re affected by that. I definitely can relate to that feeling of like rage borne from isolation, rage borne from a sense of self-victimization that then like billows out of proportion. That’s what I was drawing from. And then ultimately showing the violence and dark side of that.”

Modderno also says her trans experience gives her a unique perspective of the other teen characters.

“As a writer, I think of my transness as a superpower because it’s an exercise in empathy,” Modderno said. “I lived the early part of my life as a boy. I’ve been around locker room talk. I know how, specifically, male pressures can shape a person. Because I thought of my friends. And then when I transitioned, I could see how that same pressure they feel can be used against women. And while I’ve long identified as a woman at this point, it’s given me like a broad lens to pull from when I’m writing.”

Also Read: Elliot Page Had Top Surgery After Coming Out as Transgender: It 'Transformed My Life'

See how themes of cyberbullying and revenge are explored in Season 2 of “The Birch.” The series will drop episodes weekly on Fridays at 3 p.m. PT / 6 p.m. ET with the finale on May 28, 2021. All 10 episodes will be available globally on Facebook Watch on The Birch and Crypt Monsters pages.

As a bonus, hear Modderno’s reaction to actor Elliot Page’s recent transition, which she calls “liberating”: