Clark Middleton may have only appeared as eccentric DMV employee Glen Carter in 13 episodes of NBC’s “The Blacklist,” but series creator Jon Bokenkamp says the late actor’s mark on the James Spader drama is “undeniable.” That’s why Friday’s episode of “The Blacklist” will serve as a tribute to Middleton, who died last October at the age of 63, following a battling the West Nile Virus.

The hour, titled  “The Wellstone Agency,” will follow Raymond “Red” Reddington (Spader) and his righthand man Dembe (Hisham Tawfiq) who learn of Glen Carter’s death and then try to fulfill his final wishes, leading to a guest appearance by Huey Lewis. (Readers can see a photo from Friday’s episode below.) 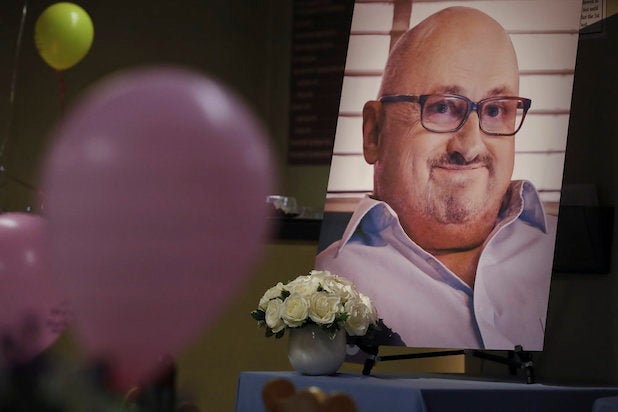 “I remember seeing tape of Clark when our casting folks put him up for a part on the show,” Bokenkamp told TheWrap ahead of the Friday premiere of Middleton’s tribute episode. “I immediately fell in love with him. So much so that we decided not to cast Clark in the role he was auditioning for but to create a whole new role for him. That’s the only time that has happened on our show — where a part was conceived for an actor that we wanted to cast. And it was an absolute blast!”

He continued: “Clark somehow knew how to make Glen Carter — an incredibly annoying and frustrating guy — incredibly lovable and fun to watch. He approached the part with a real humanity, which is why I think the character resonates so much for our audience. Over the past few years, Clark and I became good friends. We’d grab dinner, meet up after press events, or hang out and talk about movies. Those are some of my best memories — just getting to know him outside of the show. Clark was a great guy, a fantastic actor, and I miss him dearly — his mark on ‘The Blacklist’ is undeniable.”

“The Blacklist” airs Fridays at 8/7c on NBC.