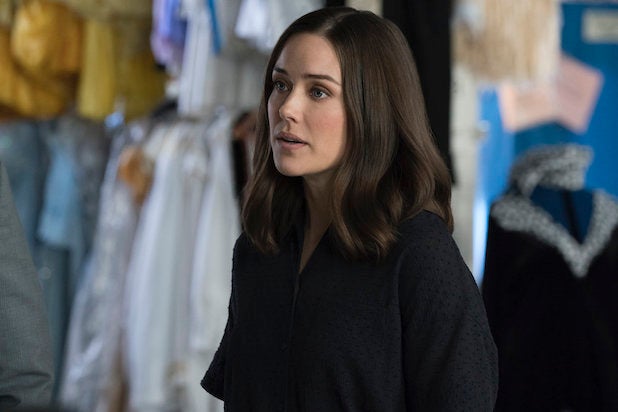 (Warning: This post contains spoilers for Episode 702 of “The Blacklist.”)

Just when you thought things were kinda, sorta, maybe safe for Liz (Megan Boone) again, “The Blacklist” went and threw viewers a curveball by placing her within spitting distance of Katarina Rostova a.k.a. her mother a.k.a. the biggest threat in the entire world to Liz, her daughter Agnes and Raymond Reddington (James Spader).

Of course Liz doesn’t know this woman who has moved in across the hall is her mother, since she’s never met her mother before and Katarina (played by Laila Robins) put on an American accent and introduced herself to Liz and Agnes as Maddy Toliver. She says she’s subletting the apartment from Liz’s longtime neighbor and she’s sure she’ll be “seeing more” of the mother and daughter. Aw, isn’t that horrifying?

To find out more about where this mess is going, TheWrap spoke with series creator Jon Bokenkamp who definitely didn’t help ease our concerns for Agnes and Liz.

See our interview below.

TheWrap: Why did Katarina assume a new identity and move into Liz’s building? Are Liz and her daughter safe??
Jon Bokenkamp: What a lovely new neighbor, right? We thought it would be fun to put the devil right next door — the wolf in sheep’s clothing. Are Liz and Agnes safe? Absolutely not!

TheWrap: Red says he wants Liz to introduce Agnes to Dom when he’s well. If he does get better, do you foresee Agnes having a relationship with her great-grandfather?
Bokenkamp: First off, we love Brian Dennehy, so any chance to have him on the show is a blessing and a good thing. But the truth is, Dom is very ill. The relationship that Red might wish Agnes could have with Dom seems impossible to me — but I can tell you that his storyline is far from over.

TheWrap: How will Frankie play into the rest of the season now that Red doesn’t want to let her go?
Bokenkamp: I think the important thing to remember is that Frankie saved Red’s life. He’s alive because of her — but he also nearly died because of her. Red isn’t going to forget that. That said, I think he recognizes an opportunity here, and I think he sees a thread of integrity in Frankie that lands with him emotionally. Let’s just say we haven’t seen the last of Francesca Campbell.

“The Blacklist” airs Fridays at 8/7c on NBC.