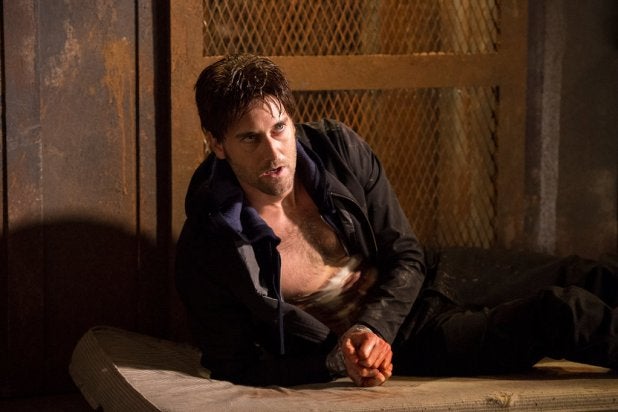 (Spoiler alert: Do not read on if you have not yet watched Monday’s midseason finale of NBC’s “The Blacklist” entitled “The Decembrist.”)

It was a deadly midseason finale for “The Blacklist,” which is making way on NBC’s schedule for “State of Affairs” starting next week. The next episode of “The Blacklist” won’t air until after NBC’s coverage of the Super Bowl.

The show will presumably use that time to mop up all the blood and strewn body parts from the bloodbath that claimed several lives, including two major characters.

Secrets were revealed and lives were lost as we finally learned who was behind Berlin’s (Peter Stormare) crusade against Red (James Spader). Alan Alda has been a powerful presence in limited appearance on “The Blacklist” as director of national intelligence Alan Fitch, who has no problem bossing Red around. And, as it turns out, he’s the one who set Berlin on Red’s trail.

Also read: NBC's 'The Blacklist' Acquired by Netflix for $2 Million Per Episode

It was Fitch who orchestrated both the bombing that killed Berlin’s men, as well as the faked death of his daughter. Berlin got to him first, and strapped an explosive bomb around his neck. Unfortunately, not only was there not enough time to deactivate it, there wasn’t enough time for Fitch to tell Red where a safe is in St. Petersburg. Sounds like a new mission.

But Fitch was’t the only casualty of the night. Despite being sometimes allies with him through the hour, there’s too much bad blood — literal and figurative — between Red and Berlin at this point. So Red shared vodka shots with him and then filled him with four shots of the bullet variety. That’s one way to put a cap in an ongoing storyline.

At least the Tom (Ryan Eggold) storyline still has plenty of legs, as the episode concluded with the latest shocker on that front. Red paid him off and told him he’s to never see Liz (Megan Boone) again, to which Tom responded, “For what it’s worth, I was tied up for four months on that ship, and I never told her about us. Not one word.”

The odds of Tom simply walking away seem pretty slim now. And the odds of Liz never finding out about whatever arrangement Tom and Red had is even slimmer. Of course, Red will string her along with some other morsel and she’ll get over it and continue working with him … until the next time some nefarious lie or secret is exposed.

“The Blacklist” returns Sunday, Feb. 1, after the Super Bowl on NBC.