The doors to the Scarlet fashion closet have officially been bolted — though hopefully not permanently — as “The Bold Type” aired its series finale on Wednesday. And as series finales go, it really stuck the landing. Fans were overwhelmingly content with how things ended, and for Katie Stevens, who played Jane for the series’ entire five-season run, that’s no small accomplishment.

Indeed, in the final episode of the series Kat (Aisha Dee), Sutton (Meghann Fahy) and Jane (Stevens) all got their happy endings — surprising as they might’ve been. Sutton and Richard ended up together with no plans to have a kid, Kat ended up with Adena (Nikohl Boosheri) and became editor-in-chief of Scarlet, and Jane ended up leaving Scarlet altogether to travel and write.

And really, those endings came in large part from the minds of the actors themselves. In Jane’s case, Stevens fought for the return of Ryan, a.k.a Pinstripe, played by Dan Jeanotte, she fought for Jane’s brief tryst with Zach the bodyguard and yes, she actually fought to make sure Jane actually left Scarlet. 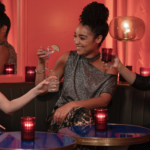 “I was like ‘It doesn’t make sense to me that she would give up editor-in-chief and then just stay at Scarlet.’ She reached the peak, almost, of where she could go with Scarlet, and I think that it was important that like, ‘No, the reason I’m letting go of all of it is because there’s so much more that I have to experience in life, and I have to do it without a safety net.'”

Really, being able to have that level of input and autonomy over the character she’s played for half a decade now made the final weeks of “The Bold Type” that much sweeter for Stevens. Asked if there was anything she really wanted from the series finale that she didn’t get, the actress comes up blank.

“I mean honestly, no. I fought for Dan to come back, and they gave me that. I fought for Jane’s ending, they gave me that. And I think that it’s really wonderful,” Stevens says. “We’ve lived in these characters for five years, they’re so much a part of us, and the writers have always created these beautiful stories, but they’ve been stories that have come from their hearts and their minds. And we loved, obviously, being able to portray those stories, but for an ending for our character, I think we’re all really grateful that they wanted our opinion, and wanted our voice to also be included in how those stories wrapped up.” 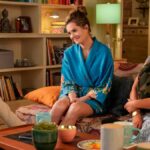 That said, Stevens openly admits that “every part of [her]” wanted Janestripe to be endgame. She simply loves Jane and Ryan as a couple. But she knew that it wasn’t what Jane needed at this point in the story, so she didn’t push that part. (It’s fine though, because in her — and fans’ — head canon, the pair find their way back to each other eventually).

All Jane needed was to be brave, and have the support of her friends. And yes, that on-screen sisterhood is very real. Stevens notes that the only reason the OT3 were so convincing on-screen was because they genuinely loved each other that much off-screen.

“I’m gonna continue to have those Jane/Kat/Sutton moments with Meghann and Aisha as my friends, so in a weird way, it’s like the show will never end,” Stevens notes. “But it is weird to think, like, ‘Oh, there’s not gonna be anymore episodes.'”