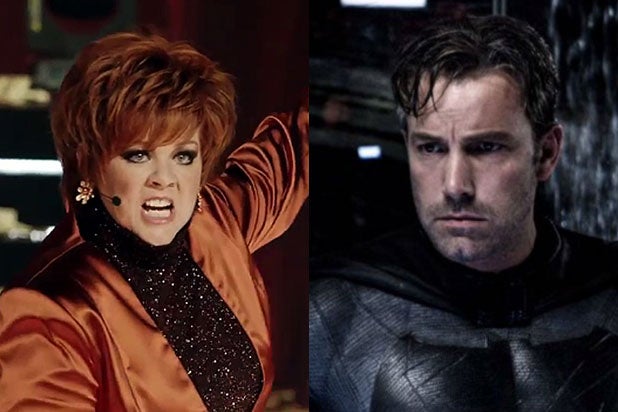 “Batman v Superman: Dawn of Justice” and Melissa McCarthy‘s “The Boss” are neck and neck in Fandango’s advanced ticket sales, giving the new comedy a shot at dethroning the superhero saga.

According to Fandango’s Fanticipation movie buzz index released on Thursday, “Batman v Superman” scored 81 out of 100 points, whereas “The Boss” tallied 80.

STX’s “Hardcore Henry” scored 66 points and is outselling “Hitman: Agent 47” at the same point in the sales cycle.

“Movie fans in search of a date night or girls’ night out are looking forward to Melissa McCarthy‘s latest outing as ‘The Boss,'” says Fandango managing editor Erik Davis, “while action fans will revisit the big-screen showdown between Batman and Superman in its third weekend or plan to take a wildly innovative ride with ‘Hardcore Henry.'”

On Tuesday, TheWrap reported that turnout for the Henry Cavill-Ben Affleck comic book adaptation is expected to drop by half after suffering a massive decline of 69.1 percent in its second weekend. It’s projected to earn less than half of its $51.3 million from last weekend.

Also Read: 'The Boss' Review: Melissa McCarthy Has No Laughs on Her Ledger

“The Boss,” in which McCarthy plays a disgraced industry titan who tries to redeem her reputation by building a brownie empire, is looking to open in the low $20 million range. That’s on par with the actress’ recent box office hits, including last year’s “Spy,” which opened to $29 million, and “Tammy,” which debuted to $21.6 million in 2014.

The weekend’s other wide opener, STX Entertainment’s “Hardcore Henry,” is projected to rake in $7 million to $9 million.