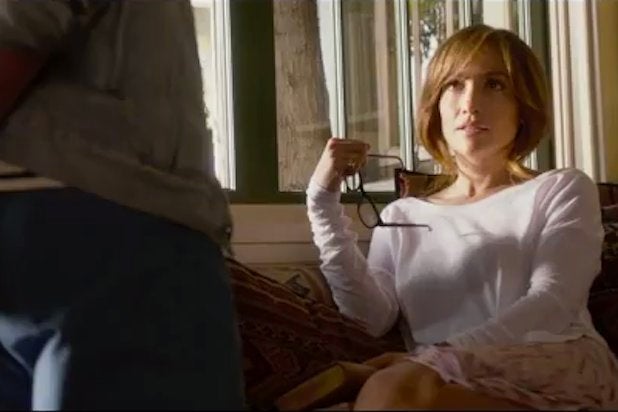 Directed by Rob Cohen (“Alex Cross,” “The Fast and the Furious”), “The Boy Next Door” is a comeback vehicle for star Jennifer Lopez as well. Repackaged here as the ultimate MILF — a goddess of the hearth who never shows anything less than grace to her teenage son (Ian Nelson), her amiable but unfaithful ex-husband (John Corbett), and her overly chatty best friend (Kristin Chenowith) — Lopez is far and away the best thing about the film, not that she has any rivals for that title. She’s alert and open, and whatever brand of virgin blood she’s been drinking lately to halt aging, it’s clearly working.

If only Cohen were as generous to Lopez’s character, Claire Peterson, as he is to his lead actress. There’s no getting around the fact that Claire is kind of a moron; the high-school English teacher defends studying literature because it helped J.K. Rowling become a billionaire and coos over the “first edition” of Homer’s “The Iliad” that her 19-year-old hardbody neighbor Noah (Ryan Guzman, “Step Up Revolution”) brings her.

When Noah starts stalking her in earnest after their wine-fueled one-night stand — hacking into her emails, sexually humiliating her at work, threatening that he’ll never let her go — she takes way too long to tell anyone about it. As Noah fuels his scorned rage into escalating acts of violence, the thriller becomes less about how much havoc this purple-faced psychopath can wreak, and more about when the hell the script is going to allow Claire to call the damn police already.

Noah’s image of himself as a romantic “hero,” combined with his dirty white T-shirt, suggests an oblique critique of the Ryan Gosling desperado mystique in “The Notebook” and “Drive.” But if that’s Cohen and screenwriter Barbara Curry’s intent, Noah’s explanatory backstory is too incoherent to satisfyingly land any argument about male obsession and control.

Neither good nor bad, nor campy nor scary enough to be in any way memorable, “The Boy Next Door” is a lot like our own neighbors, just there. You could make the effort to sneak a peek, but it probably wouldn’t be worth your while.