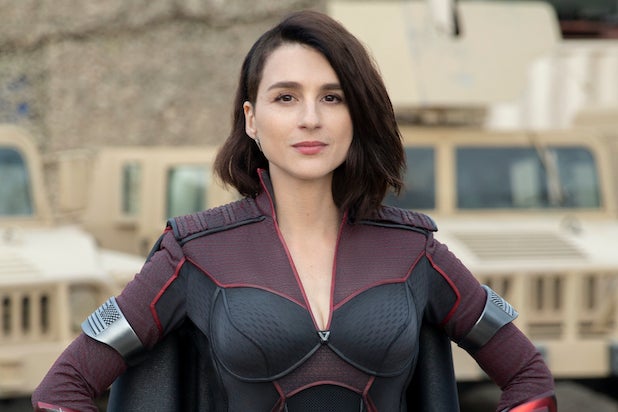 Aya Cash joins “The Boys” in season two as the newest member of The Seven. Aside from being a constant thorn in Homelander’s (Anthony Starr) side, Cash’s version of Stormfront marks the Amazon series’ biggest change from the comic it’s based on.

In Garth Ennis and Darick Robertson’s 72-issue run, Stormfront is male. But showrunner Eric Kripke had a very specific reason for changing the character into a female for the TV version.

“We wanted to sort of create Homelander’s worst nightmare. And his worse nightmare would be a strong woman who wasn’t afraid of him and proceeded to steal his spotlight,” Kripke said Thursday during a virtual CTAM panel to promote the upcoming season. “I think that would hurt him way more than if it were a male character because he is a gaping hole of insecurity.”

In the Amazon series, Cash’s Stormfront is also very social media savvy, which Kripke said allowed them a more modern way of showcasing some of the “hateful ideologies” that the comics-version of the character is known for harboring. In the comics, “The Boys” takes place between 2006 and 2008, when social media was very much in its infancy.

“A lot of hate and negative thought these days, if you look online, is packaged in really slick, social media-attractive ways,” Kripke explained. “It’s not like the old dudes with crew cuts in the 1960s newsreels anymore.” He added that Cash represents how some of those movements are led by “young people, who are trying to hook in a new generation and we sort of wanted to reflect how insidious that is.”

“The Boys” return for Season 2 on Amazon beginning Sept. 4.