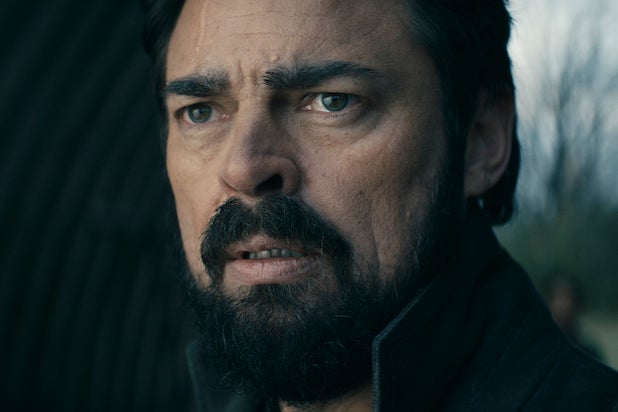 (Warning: This story contains major spoilers for the Season 2 finale of “The Boys.”)

“The Boys” Season 2 came to an end Friday with a finale that saw the tragic accidental death of Becca (Shantel VanSanten) at the well-meaning superhuman hands of her son, Ryan (Cameron Crovetti), who killed his mother in front of Butcher (Karl Urban) while the little boy was trying to protect her from being strangled by Nazi supe Stormfront (Aya Cash). He manages to burn Stormfront to an almost dead crisp with his laser-beam eyes, but leaves his mothers throat slit in the process.

Butcher (Karl Urban) honors Becca’s final words after she bleeds out, by making sure Ryan knows it wasn’t his fault, and keeping him away from his biological father, Homelander (Antony Starr). He sends him off with Col. Mallory (Laila Robins), as he and the rest of The Boys are exonerated and able to go their separate ways for now. For Hughie (Jack Quaid) that’s going to work for congresswoman Victoria Neuman (Claudia Doumit) to try to battle the Supes and Vought in a less physical way — after the audience finds out she’s the one who is responsible for blowing up all of those heads at the congressional hearing.

With so much to unpack from the finale, TheWrap let “The Boys” showrunner Eric Kripke steer us through his final installment of Season 2 and tease where things are headed in Season 3 of the Amazon Prime Video series.

TheWrap: Why’d you have to kill Becca?
Eric Kripke: I’m sorry. Because she– Because Butcher would be– the show would be over. Butcher would just be stable and good and way too functional. So, you know, she– unfortunately, she had to die.

Alright, fine. So the promise that Butcher made to Becca to take care of Ryan, to make sure Ryan knows it wasn’t his fault he killed his mom, that it was an accident. Butcher does the right thing, he protects Ryan and he gives him to Mallory. Can you allude to where this is headed for Season 3? Because I can’t imagine he’s not going to keep tabs on Ryan after making that promise to Becca, despite the fact Ryan is responsible for her death.
Without talking too much about Season 3, emotionally, the Butcher that we see at the end of this season continues but with a vengeance. He’s at war with himself. There’s a part of him that’s represented by Becca and Hughie and Ryan, there’s like a part of them that just has a humanity. It’s a small part, but it’s a part. And the other part of him is his father, and violence and rage and unprocessed anger. And those two sides of him are really at war in Season 3, because he’s furious. And yet he can’t really be furious at the kid. And so he’s furious at Homelander. So he’s a mess. And those two sides really struggle in season three.

Is Stormfront coming back next season? Because she didn’t die! As Homelander said, she’s off in an undisclosed location, locked up.
She’s not dead. She’s ‘Stumpfront’ now. You know, no comment about whether she comes back, but she is forever going to be this kind of mutilated, stubby little Nazi, which we thought was the right punishment for somebody who so believed in Aryan purity. And remember, she ages very slow to age, so she’s got a long time to be living in this messed up state. So I think she richly deserves that.

For how she got in that state, though. First, you had the big fight, which I appreciated. The Boys took a step back there while the girls get to take down Stormfront. And Kimiko got her chance to get back at her a little bit. But it was Ryan who really took her out. It was Ryan who got to do what he did, by trying to protect his mother and then killing his mother by accident. So what was the choice there to have it be Ryan who ultimately doesn’t kill Stormfront, but ends her rather than Kimiko?
The end of a season is like trying to answer an equation. I mean, it really is. It’s really structure and math and you go through the storylines that you’re playing when you’re mapping out the whole season and you’re like, you know, Kimiko really needs to beat down Stormfront and so like we knew that had to happen and so we made sure that moment happened. But another big storyline is Stormfront trying to be Ryan’s mother and him being caught between these two mothers and caught between these two fathers and what family is he going to choose? And along with that family, there goes the fate of the planet. Because if she raises him, a kid that powerful would be like a super Nazi. That’s a bad, bad deal. So you know, that was a big part of the story too. And then having Ryan react the way he reacted. And you know, we’ve been setting that up since, if you look at Episode 3, when he loses his temper when Homelander grabs his mom’s arm. Like, he’s just a kid and he’s not really in control of any of that. And so that was part of the storyline, too. So it’s just about choosing what goes where and making sure that we try to hit as many of the– wrap up as many of the threads as we can.

So congresswoman Victoria Neuman. Oh my God. OK, so Hughie wants to take a break from The Boys and go join her team and help fight the supes in another way — but the audience finds out she is a supe herself and the one responsible for blowing up all those heads at the hearing! So what’s going to happen to Hughie working for Neuman, seeing as he knows nothing about that?
Hughie sort of inadvertently is heading into the lion’s den. You know, he has this kind of sword hanging over his head as he goes to work at the Federal Bureau of Superhuman Affairs, the FBSA. And, you know, the whole time there’s this tension of who she really is. And sooner or later, he’s gonna discover it, obviously, and we’ll really unpack who she is and why she’s doing what she’s doing. And I think there’s surprises ahead on that.

Any idea when you guys might start production on Season 3? You’re writing it, right?
Yeah. We’re actually through a lot of the writing. So I know most of the season by now. But, like early 2021? I mean, so much of it– It’s a crazy world we live in, but the goal is hopefully early ’21.