If Amazon Prime Video’s “The Boys” had launched back in the early ’90s — when, you know, Amazon Prime Video was not a thing — the cast of the raunchy superhero series would mainly consist of “Saved by the Bell” stars, according to executive producers Eric Kripke, Seth Rogen and Evan Goldberg.

During a Wednesday Q&A introducing Amazon’s virtual FYC experience for Season 2 of “The Boys,” the trio of men behind the TV adaptation of Garth Ennis and Darick Robertson’s comic series were asked to dream up leads for a pre-21st century version of their show.

“Well, Hughie (played by Jack Quaid on “The Boys”) would be Simon Pegg, that’s an easy one,” showrunner Kripke said.

“And by that logic, Nick Frost would be in there somewhere,” Goldberg added.

But when it came to the Supes of the Seven, the executive producers only had eyes for the students at Bayside High.

“They’d all be Mario Lopez,” Rogen said, picking the actor who played Slater on the the beloved 1989-1993 NBC sitcom, before Goldberg added, “I was gonna say Mario Lopez!”

“Homelander (played by Antony Starr on the Amazon series) could be Zack [Morris],” Kripke added, referring to Mark-Paul Gosselaar’s character on “Saved by the Bell.”

“And maybe The Deep would be Mario Lopez,” Rogen said.

“We should just do the whole ‘Saved by the Bell’ cast,” Kripke decided, and his fellow executive producers agreed.

Watch that clip from Wednesday’s Q&A with “The Boys” executive producers via the video above.

“The Boys” Season 2, which launched Sept. 4 on Amazon Prime Video, saw an 89% jump in viewership from Season 1 in its first two weeks on the streaming platform. The season ended Oct. 9, with production on the third season set to begin early next year. Readers can find out everything we currently know about “The Boys” Season 3 here.

You can check out Amazon Prime Video’s virtual experience for “The Boys” Season 2, featuring includes behind-the-scenes interviews about Season 2 moments like the exploding whale (which you can see below), right here. 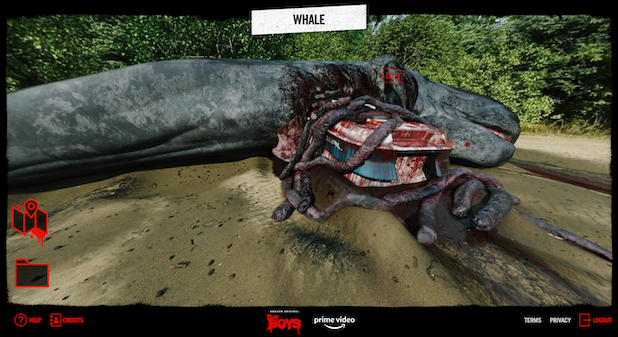