Much ado has been made about the various bodily fluids that flow freely in Prime Video’s raunchy superhero takedown series “The Boys.” In Season 3, there’s the usual stream of crimson blood (and unraveling intestines), as well as the addition of a vomit so green it rivals Nickelodeon’s iconic slime.

In the third season’s second episode, titled “The Only Man in the Sky,” the Boys ringleader Billy Butcher (Karl Urban) decides to take V24, a short-term strain of the Compound V that births Supes, in order to “level the playing field” in the fight against them and Vought, the conglomerate that props them up. Except, the substance isn’t stable, leading to a scene in Episode 3 where he unwittingly projectile-vomits onto his protégé-of-sorts Hughie (Jack Quaid).

“Oh, man, I think it bonded us closer together, right?” Quaid said, laughing, when asked what it was like filming the scene. “There was a take where I think you threw up on me and then I inadvertently spit it back up onto you.”

“It was the gift that just kept on giving back,” Urban joked. 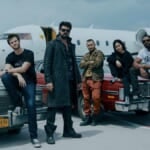 This week’s episode sees Hughie — already skirting his duties at undercover Supe and shady congresswoman Victoria Neuman’s (Claudia Doumit) Federal Bureau of Superhuman Affairs — inject V24 as well, despite express orders against doing so. It’s all fun and games for him (literally, since his manifested abilities are teleporting sans clothing) until the wicked hangover that follows. Meanwhile, Karen Fukuhara’s Kimiko — a freed Supe who was formerly indoctrinated into committing terrorist acts — is still finding where she fits into the group overall.

“I think in Seasons 1 and 2, it was a lot of listening to the other actor and taking it in and doing as much as I can with the gestures,” said Fukuhara, who worked with sign language coach Amanda Richer to develop her own dialect for the show. “Before going into filming for Season 1, I went to a dog shelter ’cause she’s captured in her opening sequence, so I wanted to get the body movements of an animal that is being kept in a cage.”

Watch the full interview above. New episodes of “The Boys” Season 3 drop on Prime Video on Fridays. 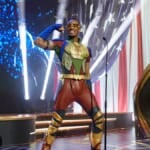 Also Read:
How Demand for ‘The Boys’ Stacks Up Against Other Superhero Shows | Charts