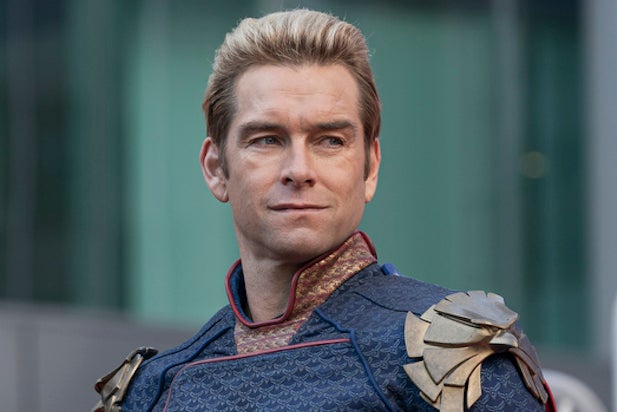 Amazon Prime Video’s “The Boys” will pay tribute to its source material in the raunchiest of ways for its upcoming third season: by adapting the infamous “Herogasm” arc from the comics that fans have been begging for since the superhero series premiered.

“From day one, everyone dared me to make this episode. CHALLENGE MET MOTHERF—-RS,” showrunner Eric Kripke tweeted Sunday. His post included a photo of the first page of the Season 3, Episode 6 script, written by Jessica Chou and titled “Herogasm.”

OK, so for those of you who aren’t familiar with “The Boys” comics, written by Gareth Ennis and illustrated by Darick Robertson, you might not understand what the big “challenge” here is, so we’ll break it down for you.

“The Boys: Herogasm” is actually a six-issue spinoff series of “The Boys” comics, written by Ennis and illustrated by John McCrea. The arc was a takeoff on comic book crossovers and featured Homelander (played by Antony Starr on “The Boys”) and the other supes leaving Earth under the guise that they are going to fight an alien threat. But instead of doing that, the group goes to an island resort where “Herogasm,” a weekend full of sex and drugs, is happening. Butcher (Karl Urban), Hughie (Jack Quaid) and The Boys show up to the event to dig up some dirt on Vought.

Being a comic book series that already features a lot of sex and violence, “Herogasm” takes things a few steps further with the most debaucherous behavior from our “heroes.” And seeing as “The Boys” TV series is definitely already meant for very mature audiences, we can only imagine what Kripke has come up with to bring some of the most graphic pages of the graphic novels to the small screen.

“The Boys” Season 3 is set to begin production soon. Find out what we know about the season — so far — here.