David Duchovny, the star of series like “The X-Files” and “Californication,” becomes a recurring figure in Netflix’s “The Chair,” a satirical send-up of modern academia starring Sandra Oh as the beleaguered new chair of the English department at struggling (and fictional) Pembroke University.

When the wife of Pembroke’s dean (David Morse) insists that a prestigious lecture series go not to a seasoned academic like junior professor Yasmin McKay (Nana Mensah) but instead to Duchovny, Oh’s Ji-Yoon Kim reacts with incredulity — even when the dean assures her that Duchovny is a “New York Times bestseller.” He adds, “Look it up.”

And we did. Turns out Dean Larson is right (even if hiring guest lecturers based on who his wife bumps into at the farmer’s market remains questionable). Duchovny’s 2015 debut novel, “Holy Cow,” entered the Times’ hardcover fiction list at No. 16. The actor has since published three more novels, “Bucky F*cking Dent” (2016), “Miss Subways” (2018) and “Truly Like Lightning” (2021). 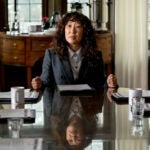 “The Chair,” which was created by Amanda Peet and Annie Julia Wyman, nails other aspects of Duchovny’s pre-Hollywood sojourn in higher education. The Princeton graduate really did write his senior thesis about “The Schizophrenic Critique of Pure Reason in Beckett’s Early Novels.”

And he really did pursue a Ph.D in English at Yale in the mid-1980s, studying under the renowned literary scholar Harold Bloom. But he dropped out of the program before completing his dissertation, which had the prospective title: “Magic and Technology in Contemporary American Fiction and Poetry.”

In a 2000 interview with the Hartford Courant, Bloom recalled: “He was one of my graduate students. I remember him as a pleasant young man.”

Duchovny makes a cameo as himself – or at least a heightened version of himself — in the fifth episode of “The Chair.” He’s quite serious about his academic background but wants to use the guest lecture gig as a shortcut to earn his Ph.D. True to self-mocking form, this serious scholar is also introduced wearing only a red Speedo while emerging from his indoor swimming pool.