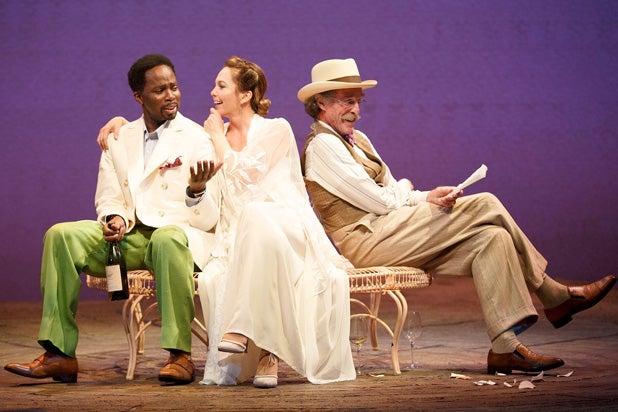 Anton Chekhov, fearing a sentimental interpretation of his play “The Cherry Orchard,” never wanted us to see Madame Lyubov Andreyevna Ranevskaya’s actual orchard. Andrei Serban brilliant 1977 revival of the play at Lincoln Center defiantly put those trees upstage for the entire performance, and the effect proved riveting. So was the cast led by Irene Worth and Raul Julia, with a very young Meryl Streep cast in the small but significant role of the ditsy maid Dunyasha.

The theater’s most famous cherry orchard makes a return appearance in the Roundabout’s new revival, which opened Sunday at the American Airlines Theatre. Those soon-to-be-chopped-down fruit trees are represented by hanging mobile-like sculptures, designed by Scott Pask, and they kept reminding me of the Serban production. In the end, they’re the least of what’s wrong in Simon Godwin’s staging of Stephen Karam’s new adaptation.

Where Serban was insightful and nuanced, Godwin and Karam are all broad strokes. They’re also often messy in their execution, with several supporting characters wandering about in undefined relationships with the principals.

Karam offers plenty of modern slang in his translation — “unwind,” “going off,” “good stuff.” In the beginning, Michael Krass’ costumes stretch from the 1920s back to the era of Chekhov’s play. The designer updates a bit as the play progresses. For the final scene, most of the actors have gone completely contempo, except for Ranevskaya’s brother (John Glover), who sports some corduroy monstrosity out of “Arsenic and Old Lace.”

Godwin’s “Orchard” isn’t one of those nights in the theater where each actor appears to be performing in another production. He’s got them all on the same page, but it’s one ripped from musical theater.

With no insult to Rodgers and Hammerstein intended, I found myself casting a production of “Oklahoma!” from what transpires on the American Airlines stage. Celia Keenan-Bolger’s adopted daughter Varya is a bit dour for Laurey, but would be offset by Tina Benko’s eccentric governess Charlotta, who’s already a spot-on Ado Annie. Harold Perrineau‘s Lopakhin, the crass businessman who purchases the Andreyevna estate, manages to combine the exuberance of Curly with the malevolence of Jud.

And Diane Lane, playing the indulgent Ranevskaya, might have an Aunt Eller in her one day. But first, she needs to lose her hyper self-consciousness as a stage actress.

Oklahoma is actually closer to the world of this production than anything Chekhov imagined. While the play remains set in Russia, it’s an alternate Russia. The serfs have been replaced by former “slaves,” and when Lopakhin celebrates his big purchase, he dances a jig as if choreographed by Katherine Dunham. He and the music suggest the American South, as well as deepest Africa.

But what Godwin’s doing here cannot be likened to Michael Mayer‘s radical take on “Rigoletto,” with 1950s Vegas replacing old Mantua, in the current production at the Met Opera. Godwin indulges in muddled casting, not blind casting, since other African-American actors (Chuck Cooper as Simeonov-Pischik) play landowners down on their luck. In Godwin’s imagination, race has nothing to do with extreme racism.