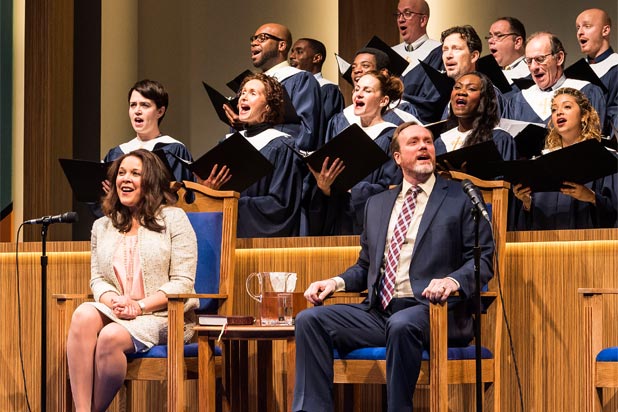 Center Theatre Group’s Mark Taper Forum, with its wood-paneled walls and comfy, arena sitting, could easily double as a well-appointed suburban mega-church. And thus is it decked out in Lucas Hnath’s provocative new drama “The Christians,” which opened Sunday (appropriately enough) for a limited run through Jan. 10.

Much of Hnath’s play takes the form of a Sunday service in an evangelical church, with a full choir dressed in navy blue robes providing a live harmonic overture before the pastor, Paul (Andrew Garman), takes the pulpit and delivers the Good News: The 20-year-old church which started in a storefront has just paid off its debt.

But Paul is not one for laurel-resting, and the remainder of his sermon includes a whopper of a surprise for his flock, which includes his wife (Linda Powell), his Bible-verse-quoting associate pastor (Larry Powell) and a patient church elder (Philip Kerr).

It seems that Paul, while attending a church function in Orlando, has had a religious conversion of sorts, and he no longer believes in hell. Even non-Christians can end up in heaven. Moreover, he insists that his congregation abandon the longstanding doctrine as well.

This does not go over well. Not with his associate pastor, who almost immediately forms his own church. Not with a soft-voiced single mom in the choir (Emily Donahoe), who holds her ground in questioning Paul about his new doctrine and wondering if he deliberately waited to reveal it until after the church building was paid off.

And certainly not with his wife, who remains mostly silent on stage until the two are alone together and she lets loose in a torrent that seems to be borne of real frustration with both the fact and the manner of his doctrinal change of heart, as well as with her gender-typed role as help-meet to her pastor husband.

Through all the upheaval, though, Garman remains the picture of unflustered equanimity, a soul grappling with profound truths that he believes have been delivered to him directly from his Creator.

He’s a remarkable character, the latest from the imaginative brain of Hnath, who established himself several years ago with the similarly ambitious and unorthodox drama “A Public Reading of an Unproduced Screenplay About the Death of Walt Disney” at Off Broadway’s Soho Rep.

Hnath, who was reared in an evangelical church, clearly has a feel for the milieu and language — and he approaches his characters with a bracing sense of compassion and sympathy. These are not stock figures but flesh-and-blood believers grappling with hard choices about deeply felt truths.

And director Les Waters, who first mounted the production with this cast earlier this fall at New York’s Playwrights Horizons, takes a similarly clear-eyed approach to the material. In a rarity for depictions of the religious, there’s no trace of condescension or cynicism.

But for Pastor Paul, the fact remains that declaring a new religious truth is easier said than done. He may have tried to banish hell in words, but he soon discovers that the reality may be just as Jean-Paul Sartre once described: Hell is other people.