Showtime released the first look at its upcoming limited “The Comey Rule,” including the first image of Brendan Gleeson as president Donald Trump.

The series is based on former FBI director James Comey’s memoir, “A Higher Loyalty.” Jeff Daniels stars as Comey. It will air over two nights in late November. That would put it after the 2020 presidential election, where Trump will try to win a second term against former Vice President Joe Biden.

The project is written by “Richard Jewell” and “Captain Phillips” writer Billy Ray and comes from Alex Kurtzman’s Secret Hideout and Shane Salerno’s The Story Factory. Along with Comey’s memoir, the series is based on more than a year of additional interviews with a number of key principals.

Here is the logline for the series from Showtime:

THE COMEY RULE takes us on an insider’s journey down the corridors of power, where decision-makers struggle to apply old norms to a dramatic new paradigm in the face of Russia’s deep and unprecedented penetration into American politics, with our nation’s rule of law hanging in the balance. Each character’s actions in these historic months made the careers of some, destroyed the careers of others and helped shape the incendiary political landscape we live in today. Part one of the series examines the earliest days of the Russia investigation, the FBI’s investigation into Hillary Clinton’s emails and their impact on Election Night 2016, when Donald Trump stunned the world and was elected president. Part two is a virtual day-by-day account of the tempestuous relationship between Comey and Trump and the intense and chaotic first months of the Trump presidency – where allies became enemies, enemies became friends and truth depended on what side you were on.

“A Higher Loyalty,” which was released in April 2018 by Flatiron Books, gets its title from Trump’s reported desire for Comey to give him a loyalty pledge. Comey was first appointed FBI director by former President Barack Obama in 2013 and was fired by Trump less than a year into his presidency.

Below get your first look at Gleeson as Trump, and Daniels as Comey. 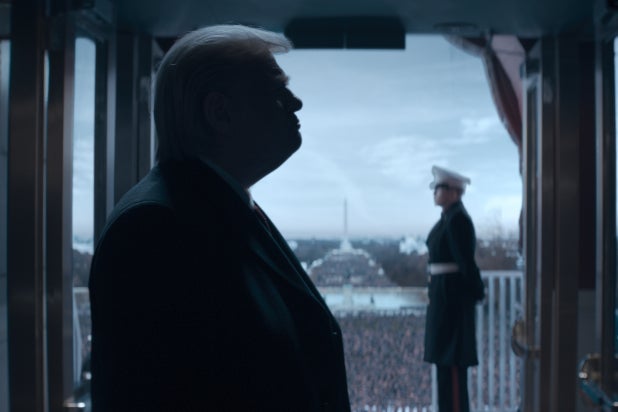